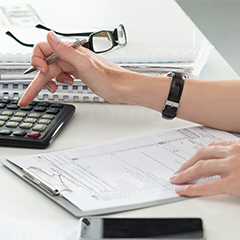 The individual Alternative Minimum Tax (AMT) is unfortunately retained by the Tax Cuts and Jobs Act (TCJA). However, here’s the silver lining: The AMT rules now reduce the odds that you’ll owe the AMT for 2018 through 2025. Plus, even if you’re still in the AMT zone, you’ll probably owe less AMT than you did under the old rules.

Here’s what you need to know about the new-and-improved AMT rules for 2018 through 2025.

Important note: The prior law version of the AMT still applies for your 2017 income tax return, which is due on April 17, 2018.

When thinking of the AMT, consider it as a separate tax system that’s similar to the regular federal income tax system. The difference is that the AMT system taxes certain types of income that are tax-free under the regular tax system and disallows some regular tax deductions and credits.

You must pay the higher AMT amount if your AMT bill for the year exceeds your regular tax bill. Originally, the AMT was enacted to ensure that very wealthy people didn’t avoid paying tax by taking advantage of “too many” tax breaks. Unfortunately, the AMT also hits some unintended targets, but the new AMT rules are better aligned with Congress’s original intent.

The following table summarizes the AMT exemptions and phaseout thresholds for 2017:

The following table summarizes the AMT exemptions and phaseout thresholds for 2018:

The exemption is reduced by 25% of the excess of AMT income over the applicable exemption amount under both old and new law. But under the TCJA, only those with really high incomes will see their exemptions phased out, while others (including middle-income taxpayers) will benefit from full exemptions.

Risk Factors Before and After the TCJA

Various interacting factors come into play when evaluating who the AMT will apply to or not, but there are several common warning signs to watch for under the old and new rules.

Substantial income. High income can cause the AMT exemption to be partially or completely phased out. The TCJA significantly increases the exemptions and thresholds for 2018 through 2025, reducing or eliminating the AMT hit for most taxpayers.

Significant depreciation write-offs. Individuals may deduct depreciation expense for fixed assets — such as machinery, equipment, computers, furniture and fixtures — from owning sole proprietorships or investing in S corporations, limited liability companies or partnerships. These assets must be depreciated over longer periods under the AMT rules, which increases the likelihood that you’ll owe the AMT.

Interest from “private activity bonds.” This income is tax-free for regular federal tax purposes, but it’s taxable under the AMT rules. Unfortunately, this risk factor still exists under the new law.

For assets placed in service between September 28, 2017 and December 31, 2022, under the new law, businesses can deduct the entire cost of many depreciable assets in the first year under both the regular tax rules and the AMT rules. So this risk factor is diminished for newly added assets. However, it continues to exist for older assets that are subject to the depreciation schedules allowed under the prior law.

It’s best not to automatically assume you’ll be exempt even though the new law reduces the odds that you’ll owe the AMT for 2018 through 2025. Be aware of the risk factors that still apply under the new law, because IRS auditors are specifically trained to find them. If you fail to report your AMT obligation, you’ll owe back taxes, interest, and possibly penalties.

If you’re at risk, some planning strategies may be available to lower your AMT profile, so ask Filler and Associates or your tax advisor about your AMT exposure.

« How to Get More from Your Business Valuation
IRS Releases New Withholding Tables: Maine Employees Could See Changes Soon »