Many Businesses Will Celebrate Tax Cuts in the New Tax Year 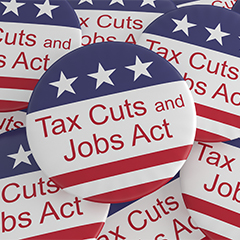 Starting with the 2018 tax year, most businesses in Maine and the U.S. will receive a big tax cut, thanks to the new law that was enacted on December 22. However, some industries (such as banking, hospitality and retail) generally expect to reap more benefits than others (such as certain professional practices).

The provisions in the Tax Cuts and Jobs Act (TCJA) are generally effective for tax years beginning after December 31, 2017 (except where noted otherwise). And, many of these provisions are permanent unlike the provisions for individual taxpayers,.

To help understand some of the changes that affect businesses, here is an overview.

The TCJA establishes a flat 21% corporate rate for tax years beginning after December 31, 2017. That reduced rate also applies to PSCs.

The corporate AMT, under prior law, was imposed at a 20% rate. However, corporations with average annual gross receipts of less than $7.5 million for the preceding three tax years were exempt. The TCJA now repeals the corporate AMT for tax years beginning after December 31, 2017.

In general, businesses will be able to deduct more for capital expenditures in the first year they’re placed in service, and in some cases depreciate any remaining amounts over shorter time periods. Two key tax breaks allow for accelerated expensing:

2. More generous first-year bonus depreciation. Under the TCJA, for qualified property placed in service between September 28, 2017, and December 31, 2022 (or by December 31, 2023, for certain property with longer production periods), the first-year bonus depreciation percentage is increased to 100% (up from 50% in 2017). The 100% deduction is allowed for both new and used qualifying property.

The first-year bonus depreciation deduction is scheduled to be reduced in later years as follows:

For new or used passenger vehicles that are placed in service after December 31, 2017, and used over 50% for business, the maximum annual depreciation deductions allowed under the TCJA are:

For 2017, the limits under the prior law for passenger cars are:

Full deductions for interest paid or accrued by a business were generally allowed under prior law (subject to some restrictions and exceptions). Under the TCJA, affected corporate and noncorporate businesses generally can’t deduct interest expense in excess of 30% of “adjusted taxable income,” starting with tax years beginning after December 31, 2017.

This limit applies at the entity level, rather than at the owner level for S corporations, partnerships, and LLCs that are treated as partnerships for tax purposes.

Business interest expense that’s disallowed under this limitation is treated as business interest arising in the following taxable year. Amounts that can’t be deducted in the current year can generally be carried forward indefinitely.

Important note: Some taxpayers are exempt from the interest deduction limitation, including:

In addition, the TCJA disallows employer deductions for the cost of providing commuting transportation to an employee (such as hiring a car service), unless the transportation is necessary for the employee’s safety. And the new law eliminates deductions by employers for the cost of providing qualified employee transportation fringe benefits (for example, parking allowances, mass transit passes, and van pooling). However, those benefits are still tax-free to recipient employees.

For business taxpayers with foreign operations, the TCJA includes many changes that will affect them. In conjunction with the new 21% corporate tax rate, these changes are intended to encourage multinational companies to conduct more operations in the U.S., with the resulting increased investments and job creation in this country.

Other noteworthy provisions of the TCJA that might affect your business include:

Net operating losses (NOLs). For NOLs that arise in tax years ending after December 31, 2017, the maximum amount of taxable income for a year that can be offset with NOL deductions is generally reduced from 100% to 80%. In addition, NOLs incurred in those years can no longer be carried back to an earlier tax year (except for certain farming losses). Affected NOLs can be carried forward indefinitely.

Cash method accounting. The new law liberalizes the eligibility requirements for electing the more-flexible cash method of accounting, making that method available to many more medium-size businesses. Also, eligible businesses are excused from the chore of doing inventory accounting for tax purposes.

R&D expenses. Under prior law, eligible research and development expenses can be deducted in the current period. Starting with tax years beginning after December 31, 2021, specified R&D expenses must be capitalized and amortized over five years, or 15 years if the R&D is conducted outside the U.S.

Officers’ compensation. Deductions for compensation paid to principal executive officers generally can’t exceed $1 million a year. A transition rule applies to amounts paid under binding contracts that were in effect as of November 2, 2017.

Rehab credits. For amounts paid or incurred after December 31, 2017, the TCJA repeals the 10% rehabilitation credit for expenditures on pre-1936 buildings. The new law continues the 20% credit for qualified expenditures on certified historic structures, but the credit must be spread over five years. Certain transition rules apply.

Domestic production activities deduction (DPAD). The DPAD, which could be up to 9% of eligible income, is eliminated for tax years beginning after December 31, 2017.

We’ve summarized only the highlights of the TCJA here, as it is almost 500 pages long and covers a wide range of topics. For more detailed information, contact Filler & Associates or your tax advisor for insight into how the changes will impact your specific business.