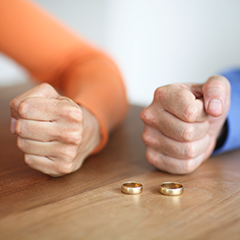 In In re Marriage of Cheng, the trial court determined that the nonbusiness owner spouse (wife in this case) was entitled to maintenance payments totaling about $640,000 over 44 months. The husband appealed, claiming that those payments in essence “came from” the value of the business after the wife had already received half of the business’s value in the division of property. The business was valued under an income approach.

The state Court of Appeals disagreed. It found that, for purposes of determining the owner spouse’s ability to pay maintenance, the trial court could consider all income—in this case, about $925,000 per year. According to Alerding, the theory of the court is the husband is awarded the business, which distributes about $925,000 annually to him out of which he can pay maintenance without diminishing the value of the company. All else being equal, the company retains its value of $3.6 million at the end of each year.

Not a Wasting Asset

Alerding says it is a curious anomaly that this occurs. He explains that, under a discounted cash flow analysis, as each year ends, each year in the now new DCF moves one year closer to the current value. Because of the diminishing value in the far out years (it is an infinity calculation in the terminal value), the overall value remains the same, again all other things being the same. Technically speaking, Alerding says, this particular business—and any business so valued—is not a wasting asset; therefore, using any of its (distributed) income to pay maintenance would not impede the value of the business. Extending that theory, there would not be a case where a “double dip” could occur.

Or, as the Court of Appeals in Cheng put it: “Because FFM generates net profit from its operations for Victor to receive as income without decreasing its value, this case does not involve double recovery for Julia. Victor will have close to $925,000 annually available to pay maintenance and despite this distribution of income FFM will retain its $3.6 million value. Therefore, we reject Victor’s double recovery argument.”

Alerding notes this construct may be unique to Washington State. Double dipping, like goodwill, is an issue that states have handled differently. Consequently, other states may very well take the view that any invasion into the future income that has already been distributed as part of the value of the business would indeed be a double dip. Valuators need to inform themselves of the double-dip jurisprudence the court in front of which they practice has developed, Alerding cautions.