Employers Affected by Recent Hurricanes Get a Valuable Tax Credit 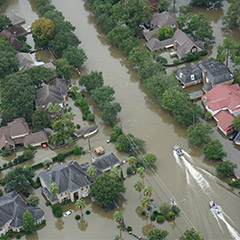 On September 29, 2017, a new law was signed by President Trump providing various tax breaks for victims of Hurricanes Harvey, Irma and Maria. Among them is a valuable tax credit for eligible employers affected by the devastating hurricanes.

An “employee retention credit” is allowed by the Disaster Tax Relief and Airport and Airway Extension Act of 2017. In general, the credit equals 40% of up to $6,000 of qualified wages with respect to each eligible employee for the tax year. Here are the specifics of the law, after first covering some background information.

Before the new law: For purposes of determining each credit’s allowance limitation for the tax year, certain business incentive credits are combined into one general business credit. Claimed on Form 3800, the credit is allowed against income tax for a particular tax year and equals the sum of:

New law: A new employee retention credit is now available for “eligible employers” affected by Hurricanes Harvey, Irma and Maria. Eligible employers are generally defined as those that:

Ask your tax advisor for more details about this important credit and how your business might be able to benefit, especially because the new law also contains other rules.

« Case Collapses When Experts Apply Wrong Measure of Damages
Does Your Expert Know What Is Being Valued? »