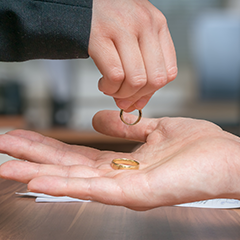 In a Louisiana divorce case, the trial court applied the value stated in a stock agreement the physician owner-spouse had entered into with his firm in the context of partition. In her appeal, the wife objected that by doing so the trial court had assigned an “arbitrary price … not based on any indicia of financial value” to the husband’s enjoyment and use of the ownership interest. A majority of the appeals court affirmed, but two dissenting judges agreed with the wife.

During the marriage, the husband, a pediatrician, bought one share in a medical group for $1,000. A stock subscription agreement specified four circumstances in which the corporation would buy back each share for $1,000. The wife refused to sign the contract.

After a final divorce judgment had been issued, the husband filed a motion asking the trial court to rule as a matter of law that the value of his share for purposes of marital distribution was $1,000.

The wife opposed the motion, arguing the stock was community property and the agreement was not applicable to her because she had not signed it. Moreover, the agreement only applied in limited circumstances, which did not include divorce and/or partition. In an affidavit, her CPA expert explained that in order to determine the fair market value of the company’s stock he would need to consider intangible assets such as goodwill and going-concern value.

The trial court granted the husband’s motion. The wife appealed the ruling to the state Court of Appeal, making essentially the same arguments she had made in the trial court proceeding.

The dissent noted that, although in this case the stock agreement set the value in case of the disposition of the stock in four specific situations, it did not set the value for the husband’s use and enjoyment of the stock. To determine that value, the trial court should remand the case for further valuation, the dissent said.

« Why Are the Values So Far Apart?
Understand Your Social Security Retirement Benefits »