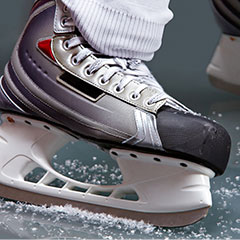 Recently, it was ruled by the U.S. Tax Court that the Boston Bruins hockey team’s pregame meals to players and personnel at out-of-town hotels qualified as a de minimis fringe benefit under the Internal Revenue Code. Therefore, 100% of the cost of those meals could be deducted, and it wasn’t subject to the 50% tax code limitation.

For sports teams and those who might spend a great deal of time “on the road,” such as actors, singers and others, some tax professionals believe the case could have wide-ranging implications.

The tax code imposes a 50% limitation on deductions for business meal expenses unless an exception applies. One such exception: The expense for food or beverages is excludable from the gross income of recipients if it’s a de minimis fringe benefit (one so small that accounting for it would be unreasonable or impractical).

Employee meals provided in a nondiscriminatory manner constitute a de minimis fringe benefit if the following conditions are met:

Among the de minimis fringe benefit rules is a requirement that access to the eating facility be available “on substantially the same terms to each member of a group of employees, which is defined under a reasonable classification set up by the employer that doesn’t discriminate in favor of highly compensated employees.”

Facts of the Case

The taxpayer was the owner of the Boston Bruins, a National Hockey League (NHL) team. After the team deducted 100% of certain pregame meal costs, the IRS disallowed 50% of this deduction.

Half of the team’s games are played away from Boston according to court documents. Teams are required by the NHL to arrive in the “away city” at least six hours before a game starts. The collective bargaining agreement (which binds the NHL, member teams and players of member teams) requires that an NHL team travel to an away city the day before game day if the flight to the city is more than 150 minutes.

The contracts between the Bruins and out-of-town hotels provide for sleeping accommodations and banquet or conference rooms where pregame meals and snacks are served. Each away-city hotel prepares pregame meals and snacks that meet the players’ specific nutritional guidelines to ensure optimal performance for the upcoming game and throughout the rest of the season. The food is made available to all traveling hockey employees.

The Bruins initiate the meal contracting process by providing a menu to the prospective away-city hotel requesting specific types and quantities of food. Using this menu, the hotel prepares and sends to the Bruins a banquet event order. The meal room itself is provided to the team at no extra cost.

Traveling hockey employees are required to be present in the meal rooms for every breakfast and lunch. Besides nutrition, the meals also provide the Bruins with an opportunity to conduct team business. Bruins players meet with coaches to discuss strategy and review films of games. Public relations employees also attend breakfasts, where they meet with players concerning anticipated media inquiries, interviews and other issues.

The court determined that the Bruins met all of the de minimis tests for the tax years in question, and thus weren’t subject to the 50% limitation on the deduction for their away-game team meals. The court’s reasoning included the following:

The nondiscrimination test. The team provided credible testimony that the pregame meals were made available to all Bruins traveling hockey employees (highly compensated, non-highly compensated, players and nonplayers) on substantially the same terms. The Bruins also provided testimony that any discrepancy between anticipated and actual meal attendees was a function of cost reduction concerns and not discrimination. Therefore, the court held that the Bruins’ provision of pregame meals to traveling hockey employees satisfied the nondiscrimination requirement of the tax code.

Employer-owned (or -leased) eating facility. The tax code doesn’t define the word “lease.” Although the contracts entered into between the Bruins and out-of-town hotels weren’t specifically identified as “leases,” the substance of these contracts indicates that the Bruins paid consideration in exchange for “the right to use and occupy” the meal rooms. So the court concluded that the agreements were substantively leases.

On- or near-premises facility. According to the court, an employer’s “business premises” are a place where employees perform a significant portion of duties or where the employer conducts a significant portion of its business. It’s not necessary for an eating facility to be located in an employer’s principal structure for it to be considered on the business premises.

The court concluded that the away-city hotels were part of the Bruins’ business premises. Staying in out-of-town hotels was necessary for the teams to prepare for games, maintain a successful hockey operation and navigate the rigors of an NHL-mandated schedule.

The Tax Court rejected the IRS’s argument that the traveling hockey employees’ activities at away-city hotels were insignificant. In short, the court disagreed with IRS contentions that 1) the activities at away-city hotels were qualitatively less important than playing in hockey games, and 2) the Bruins spent quantitatively less time at each hotel than they did at the team’s Boston facilities.

If the employer can reasonably determine that the meals are excludable to the recipient employees under the tax code, then regulations provide that an employer-operated eating facility satisfies the revenue / operating cost test. Meals are excludable to recipient employees if they’re furnished for the convenience of the employer and furnished on the business premises of the employer. (Jacobs v. Commissioner, 148 TC No. 4, June 26, 2017)

Although the IRS could still appeal the Tax Court decision, this case could have implications for other businesses providing meals in similar situations. And the facts of this case are specific and restrictive. For example, attendance at group breakfasts and lunches was mandatory for players, and the food served was deemed to provide the nutrition necessary for athletic success.

Consult with Filler & Associates or your tax advisor if you have questions about deducting business meals provided to the employees of your business.