Know the Rules for Amending a Federal Income Tax Return 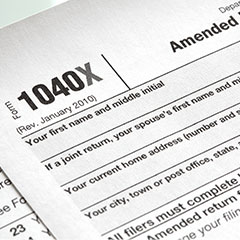 Do you know what to do if you discover an error on a previously filed individual tax return? For instance, you might have missed some tax-saving deductions and credits on your 2016 personal federal income tax return that you filed in February. Or you might have recently discovered that you failed to claim some legitimate tax breaks on your 2015 return that you filed last year. Here are the rules for filing an amended return.

First, it’s important to know that you should not attempt to correct the situation by filing another original return using Form 1040. That will just create confusion at the IRS and cause headaches for you. Instead, file Form 1040X, “Amended U.S. Individual Income Tax Return.”

How long you have to file an amended return depends on whether you’re asking for a refund or you owe additional taxes.

When Claiming a Refund

You’ll receive any refunds due the sooner you file an amended return, so don’t wait! If amending your return will produce a tax refund, the deadline for filing Form 1040X is generally the later of:

Most taxpayers focus on the three-year rule. If you filed your original Form 1040 before the April 15 due date — adjusted for weekends and holidays — you’re considered to have filed the return on April 15 for purposes of the three-year rule. However, if you extended the return to October 15 — adjusted for weekends — you’re considered to have filed on the earlier of the actual due date or the October 15 extended deadline.

For example, suppose you filed your 2016 tax return on March 1, 2017, and paid the tax due on that date. You now realize you should have itemized deductions instead of taking the standard deduction. Based on the three-year rule, you have until April 15, 2020, to file an amended 2016 return and claim your refund. However, if you extended your 2016 return to October 16, 2017, and then file before the extended deadline on September 1, 2017, the three-year period for filing an amended 2016 return starts running on September 1, 2017.

When Additional Taxes are Due

This scenario can be tricky. You’re expected to file an amended return and pay the additional tax If you discover that you understated your tax liability on the original tax return. If you don’t and the IRS discovers the error, the government will bill you for:

The sooner you file an amended return and pay the tax due, the sooner you’ll stop racking up interest and the failure-to-pay penalty.

Depending on the nature of your underpayment, you may also be assessed other penalties—but the IRS can waive all penalties if you show you had a reasonable cause for the underpayment. For example, you might have reasonable cause if you received incorrect information from a third party, such as an inaccurate Schedule K-1 from a partnership or S corporation investment.

Although IRS audits are relatively rare these days, there is a strong chance of getting caught for omitting income that’s automatically reported to the IRS on an information return, such as Form W-2 or Form 1099.

If you expect a refund then filing an amended return is relatively straightforward, as long as you’re within the requisite two- or three-year window of opportunity. But when you’ve underpaid your taxes, filing an amended return can be a dicey situation. Always consult a tax professional first to discuss the full consequences of amending your return.

In general, if the original return understated your tax bill by only a small amount, your tax advisor will recommend that you amend your return and pay the additional taxes, interest and penalties as soon as possible.

Let your tax advisor lead the way for larger understatements. They have experience in dealing with past-due taxes and may be able to get you off the hook with minimal or no penalties. But be prepared to pay at least the past-due tax plus interest. Your tax advisor can also help you file amended business returns, if needed.