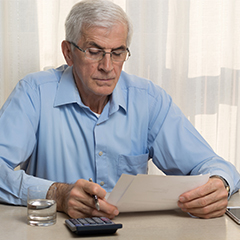 You must start taking mandatory annual withdrawals from your traditional IRAs once you turn age 70½. This includes any simplified employee pension (SEP) accounts and SIMPLE IRAs that you set up as a small business owner.

These mandatory IRA payouts are called required minimum distributions (RMDs). And if you fail to take timely distributions there’s a penalty.

Your first RMD must be taken by no later than April 1 of the year after the year you turn 70½. So, if you hit the “magic age” last year, the April 1 deadline for you to take your initial RMD just passed. Remember, however, that this initial RMD is for the 2016 tax year, even though you still don’t have to withdraw it until April 1, 2017.

The IRS will charge you a penalty equal to 50% of the shortfall (the difference between the RMD amount you should have taken for the 2016 tax year and the amount you withdrew through April 1, 2017), if you failed to withdraw the full RMD amount by April 1, 2017.

You can ignore the April 1 RMD deadline if you already took one or more traditional IRA withdrawals last year that equaled or exceeded the amount of your RMD for the 2016 tax year. Just remember to take your second RMD, for the 2017 tax year, by December 31, 2017. The calendar year-end deadline applies for all future years, too.

It is your choice if you want to withdraw that amount from any one of your traditional IRAs or from several IRAs. If your spouse also has one or more traditional IRAs set up in his or her own name, the RMD rules apply separately to those accounts. So, if your spouse turned 70½ last year, he or she may need to heed the April 1 deadline, too.

Important note: Since Roth IRAs established in your name are exempt from the RMD rules for as long as you live, you can continue to invest the full amount of your Roth IRA balances and continue to produce tax-free income throughout your lifetime.

Individuals who have reached age 70½ can make annual cash donations to IRS-approved charities directly from their IRAs, instead of taking taxable RMDs. These so-called qualified charitable distributions (QCDs) come out of your traditional IRA free from federal income tax. (Other IRA distributions, including RMDs, are generally at least partially taxable.)

You can’t claim itemized deductions for QCDs like you can with cash donations to charities. The tax-free treatment of QCDs equates to a 100% deduction however, because you’ll never be taxed on those amounts.

As an added bonus, a QCD coming from a traditional IRA counts as a distribution for purposes of complying with the RMD rules. So, if you turned 70½ last year and haven’t yet taken your RMD for last year, you could have arranged for one or more QCDs before April 1, 2017, to meet all or part of your RMD obligation for the 2016 tax year. In other words, you can substitute one or more tax-free QCDs for the RMD that you would otherwise have to take by April 1, 2017, and pay taxes on.

A QCD must meet the following requirements.

It’s important to note that there’s a $100,000 limit on total QCDs for the year. But if you and your spouse both own IRAs, you’re each entitled to a separate $100,000 annual QCD limit.

Different rules and conditions may apply to RMDs from inherited accounts and your qualified employer-sponsored retirement plans, including:

Be sure to contact your tax advisor to ensure you’re in compliance with the rules regarding RMDs in Maine because they can be quite complex. Individuals who are 70½ or older should be aware of the RMD rules and the deadlines that apply in the year they turn 70½ and beyond.

« When Can You Deduct Theft Losses?
Relying on Audit Techniques Guides »