When Can You Deduct Theft Losses? 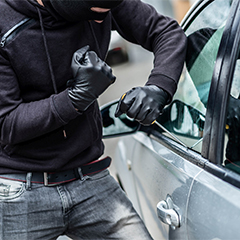 Your personal losses resulting from casualties and thefts are allowed to be deducted by the tax law, within certain limits. And a “theft” for tax purposes isn’t strictly limited to house burglaries or stolen cars. However, as you will see from several U.S. Tax Court cases, the deduction can hinge on the application of state law.

Generally, you may deduct the amount of your unreimbursed loss if you suffer a casualty or theft loss, but only to the extent that your losses for the year exceed 10% of your adjusted gross income (AGI) for the year. (Special rules apply to losses in federal disaster areas. You must subtract $100 for each casualty or theft occurrence before the 10% limit is applied.)

The deductible amount must also be reduced by any insurance reimbursements.

To keep things simple, let’s say that your annual AGI is $100,000. In February, a severe winter storm causes $20,100 of damage to your home. Your wallet with $200 is stolen from your gym locker in June. Finally, in September you have a fender-bender in that costs you another $1,000. The insurance reimbursements for the year total $6,000.

How is a “theft” defined for tax purposes? It is the taking of money or property with the intent to deprive the owner of it. However, the taking must be illegal in the state where the incident occurred and it must have been conducted with criminal intent. A theft loss is deductible in the year it is discovered.

What does the definition of theft include?

The tax law definition of theft can include the taking of money or property by:

Deductions for theft cannot be taken in many cases including when:

A contractor was hired by a husband and wife to build a $190,000 house in New Mexico. The couple began noticing problems with the house after they moved in. These problems escalated and became a “living nightmare,” according to court documents, despite the repair efforts of the contractor and several subcontractors.

The taxpayers eventually claimed a theft loss of $172,000 relating to poor construction and misrepresentations made by the contractor. This resulted in a refund of $10,225 on their amended tax return.

Under New Mexico law, fraud is defined as “the intentional misappropriation or taking of anything of value that belongs to another by means of fraudulent conduct, practices or representations.” The elements of criminal fraud include a specific intent to cheat or deceive another person.

The taxpayers argued they were entitled to a theft loss deduction on the basis that the contractor committed “fraud” under New Mexico law. “In essence, they contend that (the contractor) took money from them intending not to conform with the plans that he had agreed to follow in constructing their house,” court documents state.

However, the court determined that no crime was committed based on the facts. The reason given was that the contractor did not defraud the taxpayers by misrepresenting his qualifications. The claims he made were in the nature of “sales talk” or puffery. In the end, the taxpayers were mere victims of poor workmanship. This was certainly unfortunate for them, but not illegal. Therefore, they could not deduct the theft loss. (TC Memo 2007-366)

The court has addressed similar home construction issues on many occasions but generally rules against taxpayers on the basis that they have not proven that the “contractors acted with the requisite intent to constitute a theft crime.” The court noted that the case was “not novel.”

In the cases in which the Tax Court has allowed theft loss deductions, contractors “took money from taxpayers under false pretenses and then either absconded or ceased construction and used the money for purposes not related to the construction agreement,” the court added.

Consult with your tax advisor on how to proceed if you believe a crime needs examining for tax purposes. It is important to investigate state law to determine if a crime has actually been committed.