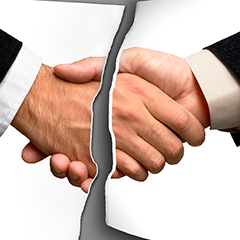 What a difference a word makes. That’s the lesson from a recent New York appellate ruling in a dispute in which a minority shareholder was found liable of wrongfully breaching the partnership agreement to secure a high price in the buyout of his shares. The plan went awry when the appellate court decided the shareholder’s conduct justified the imposition of a significant minority discount. Policy concerns underlying New York’s prohibition against the use of a minority discount in fair value proceedings did not come into play in this case, the court found, because the dispute turned on a statutory provision that required only that the wrongdoer be paid the “value” of his interest in the business.

In 1985, the plaintiffs and the defendant entered into an agreement to form a partnership that would own and operate a shopping center in upstate New York. The defendant was a general partner and held a minority—3.08%—interest. Twenty-one years later, he informed the other partners that he had decided to dissolve the partnership because of a “fundamental breakdown in the relationship between and among us as partners.”

At the start of trial, the parties stipulated that the unadjusted value of the defendant’s total interest in the business was $4.85 million as of the valuation date.

Both sides offered valuation expert testimony. Points of contention were whether the stipulated value included an element of goodwill that needed to be deducted and whether discounts for lack of marketability and lack of control were appropriate.

The plaintiffs’ expert said in order to determine the fair market value of the defendant’s minority interest, it was appropriate to discount for lack of control. Based on a number of factors, including sales of comparable interests and provisions in the partnership agreement that restricted the rights of minority owners, the expert decided to apply a 66% minority discount.

The defendant’s appraiser agreed that under normal circumstances a minority discount figured into calculating fair market value. But he did not apply the discount here because he “was advised, under the relevant statutes, that a minority discount was not applicable.”

The trial court decided to apply a 15% discount for goodwill as well as 35% DLOM. But it found that case law involving the valuation of a minority shareholder’s interest in a closely held corporation militated against the use of a minority discount.

The trial court referenced two seminal cases in support of its opposition to the minority discount. In the Beway case, New York’s highest court found a minority discount was not appropriate in determining the “fair value” of a shareholder’s interest within the meaning of Sections 623 and 1118 of New York’s Business Corporation Law. It said imposing a minority discount would mean minority shares received a value below that of majority shares, in violation of the principle that all shares of the same class must receive equal treatment in shareholder buyouts. Matter of Friedman v. Beway Realty Corp., 661 N.E.2d 972 (1995).

In Matter of Murphy, an oppressive shareholder suit brought under Business Corporation Law §1104-a, the appellate court clarified that “New York law does not permit a ‘minority discount’” but does permit a marketability discount. Matter of Murphy v. United States Dredging Corp., 74 A.D.3d 815 (2010).

The parties appealed and cross-appealed the ruling with the New York Supreme Court’s appellate division. The defendant asked the reviewing court to revisit its earlier decision that he wrongfully had dissolved the partnership. The court declined to do so, letting the lower court’s liability ruling stand.

The principal valuation issue was whether the trial court should have applied a minority discount in this case. Yes, said the appellate court.

The concerns giving rise to the prohibition against the imposition of a minority discount in cases such as Beway and Murphy did not figure into the current case, the appellate court found. It pointed out that Beway and Murphy required the determination of the “fair value” of a dissenting shareholder’s interest under Business Corporation Law §§ 623 and 1118, whereas the instant case “involves the determination of the ‘value’ of the shares of a partner who has wrongfully caused the dissolution of a partnership pursuant to Partnership Law §69(2)(c)(II).”

It further noted that applying a minority discount in the context of valuing a partnership interest would not run afoul of the corporate statutory prohibition against treating holders of the same class of stock differently nor undermine the goal of appraisal statutes to protect shareholders from being coerced into selling at unfairly low values or encourage oppressive conduct (citing Vick v. Albert, 47 A.D.3d 482 (2008)).

Where the “wrongful” conduct of a minority partner caused the dissolution, the concern that imposing a minority discount would encourage oppressive majority conduct was not relevant, the appellate court explained.

The New York appellate court found that reasoning applicable to the case in front of it. Here, as there, the partnership would continue. The defendant had no right to force a liquidation sale of the shopping mall and receive a proportionate share of the liquidation value of the asset.

In sum, the appellate court said the trial court should have applied a minority discount. As to the rate of the discount, the appellate court, without analysis or much comment, found the statement from the plaintiffs’ expert that a 66% discount was appropriate to be “credible and supported by the record.” It remanded for a new calculation of damages incorporating the 66% minority discount.