How S Corporations Can Save on Federal Employment Taxes 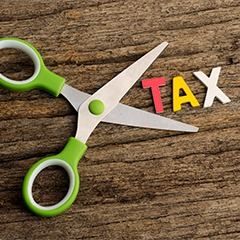 If you own an unincorporated small business in Maine, one way to lower your self-employment (SE) tax liability is to convert your business to an S corporation.

Incomes subject to SE tax include sole proprietorship income as well as partnership income that flows through to partners (except certain limited partners. These rules also apply to single-member limited liability companies (LLCs) that are treated as sole proprietorships for federal tax purposes and multimember LLCs that are treated as partnerships for federal tax purposes.

The rate drops after SE income hits $127,200 because the Social Security tax component goes away above the Social Security tax ceiling of $127,200 for 2017 (up from $118,500 for 2016). But the Medicare tax continues to accrue at a 2.9% rate, and then it increases to 3.8% at higher income levels because of the 0.9% additional Medicare tax. (This 0.9% tax applies to the extent that wages and SE income exceed $200,000 for singles and heads of households, $250,000 for married couples filing jointly, and $125,000 for married couples filing separately. The tax is part of the Affordable Care Act, so it likely will disappear if the ACA is repealed or replaced.)

Consider converting your unincorporated Maine small business into an S corporation to lower your SE tax bill in 2017 and beyond. Then paying yourself (and any other shareholder-employees) a modest salary, and distribute most (or all) of the remaining corporate cash flow to the shareholder-employee(s) as federal-employment-tax-free distributions. Here’s why this SE tax-saving strategy works.

For compensation paid to an S corporation employee in 2017, including an employee who also is a shareholder, the FICA tax rate is 7.65% on the first $127,200. This includes 6.2% for the Social Security tax and 1.45% for the Medicare tax. Above $127,200, the rate drops to 1.45% because the Social Security tax component goes away. But the 1.45% Medicare tax component continues indefinitely. At higher wage levels, S corporation employees must also pay the additional 0.9% Medicare tax. FICA tax is paid by the employee through withholding from employee paychecks.

The employer then pays in matching amounts of Social Security tax and Medicare tax (other than the additional 0.9% tax) directly to the U.S. Treasury. So the combined FICA and employer rate for the Social Security tax is 12.4%, and the combined rate for the Medicare tax is 2.9%, rising to 3.8% at higher income levels. Unfortunately, these are the same as the SE tax rates.

If you currently operate your business as a domestic limited liability company (LLC), it generally isn’t necessary to go through the legal step of incorporation in order to convert the LLC into an entity that will be treated as an S corporation for federal tax purposes. That’s because the IRS allows a single-member LLC or multimember LLC that otherwise meets the S corporation qualification rules to simply elect S corporation status by filing a form with the IRS. However, if you want your LLC to be treated as an S corporation for calendar year 2017, you also must complete this paperwork by no later than March 15, 2017.

This tax-saving strategy isn’t right for every business. Here are some things to keep in mind as you consider changing your business structure:

1. As long as your salary can be proven to be reasonable, albeit on the low side of reasonable, operating as an S corporation and paying yourself a modest salary will save SE tax. Otherwise you run the risk of the IRS auditing your business and imposing back employment taxes, interest and penalties.

However, if you gather objective market evidence to demonstrate that outsiders could be hired to perform the same work for salaries equal to what you’re paying shareholder-employee(s), you can help minimize the risk that the IRS will successfully challenge your stated salary amounts.

2. A potentially unfavorable side effect of paying modest salaries to S corporation shareholder-employee(s) is that it can reduce your ability to make deductible contributions to tax-favored retirement accounts. If the S corporation maintains a Simplified Employee Pension (SEP) or traditional profit-sharing plan, the maximum annual deductible contribution for each shareholder-employee is limited to 25% of his or her salary.

3. There will be some extra administrative hassle when operating as an S corporation. For example, you must file a separate federal return (and possibly a state return, too).

In addition, transactions between S corporations and shareholders must be scrutinized for potential tax consequences, including any transfers of assets from an existing sole proprietorship or partnership to the new S corporation. State-law corporation requirements, such as conducting board of directors meetings and keeping minutes, must be respected.

In most cases, these drawbacks are far less burdensome than the potential SE tax savings. Your tax advisor can help you minimize the downsides and work through the details.

Making the Decision to Switch

Under the right circumstances, converting an existing unincorporated business into an S corporation to reduce federal employment taxes can be a smart tax move. However, before making the switch, consult your tax advisors to ensure that all the other tax and legal implications are considered.