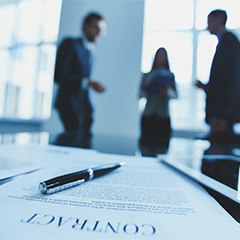 An economic damages case stemming from the breach of a non-compete agreement features a noteworthy discussion on the difficulty of quantifying losses where the injured company is of a “volatile nature.” The plaintiff’s’ expert used commonly accepted valuation methods for his calculation, but the defendants’ attorney, who was not an expert, suggested there was a simpler way. The trial court credited the expert’s approach but modified the amount based on the defendant’s objections. Interestingly, the trial and appeals courts allowed for an expansive interpretation of the non-compete both in terms of the contract’s geographical reach and expiration date.

Four investors formed a company that manufactured and sold rod guides to the oil and gas industry. They all signed an agreement that prohibited a terminated shareholder from competing with the company within 24 months of termination. The company eventually fired one of the investors, the defendant. A dissolution fight ensued that resulted in two investors (the plaintiff) buying the company’s stock at auction and terminating the defendant as a shareholder in July 2013.

The court held a separate trial to determine the damages the premature competition caused the subject company.

Only the plaintiff offered expert testimony from a CPA and credentialed business valuator. The defendant chose not to present rebuttal expert testimony or an alternative calculation of damages.

The plaintiff’s expert noted that he was not hired to determine causation but to calculate damages resulting from the loss of customers. (To protect proprietary business information, the trial court sealed large parts of the expert report as well as testimony from the subject’s remaining owners.)

In a pretrial report, the expert used “two generally accepted methods for determining damages to a company as a result of impaired operations.” The main method was a “before and after” analysis that compared the company’s performance before the alleged misconduct with its performance after the event. At trial, the expert emphasized this was “a typical model used in damages cases.” It considered the company’s sales history, avoidable costs, and variable expenses. As a “sanity check,” he also performed a discounted future earnings analysis to compare the company’s fair market value before and after the event. Both methods produced a similar result: The loss to subject was a little over $1 million.

The expert based his calculation of damages on a list of lost customers the plaintiff provided after discussing the names with a company owner. The point was to err on the side of caution and not claim a customer that should not be on the list. The expert said he compared sales to lost customers to sales to customers the plaintiff did not lose to the competitor, and he prepared a graph that showed the subject company’s performance over time. The graph indicated both a significant quarter-to-quarter volatility in sales as well as a “very loose” correlation between the sales the subject company made and the price of oil. A decline in the price of oil did not directly result in a decline in sales, the expert concluded.

At trial, he testified that he first estimated lost sales for quarters for which there were actual sales data and then extrapolated the information from the fourth quarter of 2014 to the fourth quarter of 2020. To go beyond 2020 “wouldn’t be meaningful … because we’re discounting it at such an aggressive 28% rate,” he said. Also, “2020 is far enough to kind of recover … these lost sales become less and less meaningful over time.”

He also said he increased the amount of avoidable costs after his deposition to account for greater sales commissions and shipping costs. As a result, he revised the loss through 2020 to $985,000 and allowed that it might actually be as low as $934,000.

When cross-examining the expert, defense counsel claimed the proper measure of damages was “gross sales minus expenses equal net income or net profit.” The plaintiff’s expert responded that he had “never seen a damage report that calculated damages that way from an event. It’s never been a net income number.” This method was “way too simplistic,” the expert said. It was not an approach he was not taught nor was it included in any valuation practice guide. He also claimed it did not follow the industry standard.

The expert noted that his calculation was based on several assumptions. For example, he assumed that the subject company would never regain the sales it lost within the first year of the defendant’s exit from the company. He also assumed the quarterly loss would remain consistent from 2014 through 2020. He said he calculated costs based on the current cost of production, including labor costs, but agreed the cost could be reduced. He assumed the subject company would achieve an annual 14% increase in sales even though the company’s historical performance did not support this number. He said to do so was necessary because “the expectation that they will grow it back is what gives it value—any value today.”

The trial court recognized that the plaintiff’s expert was the sole expert in the case. Even though defense counsel cross-examined him rigorously, the expert’s method held up. “I think his numbers are acceptable,” the court said.

However, it found that the longer damages were projected into the future, the greater the degree of speculation. And even though the parties did not raise the issue of technology, the court said it needed to be taken into consideration. “There may be a point in time where the rod guide is … not even necessary or useful anymore for whatever reason.” In its own words, the court “somewhat arbitrarily” decided to grant damages only through 2016—not 2020. By its recalculation of the expert’s figures, damages were about $632,000, which the court rounded down to $600,000.

The defendant challenged the award to the plaintiff on multiple grounds. For one, it claimed the trial court erred when it allowed for compensation of losses resulting from the defendant’s business activities outside the narrow geographical reach of the non-compete.

The plaintiff countered that the genesis of all the wrongful activity that led to profits the subject company lost to companies inside and outside the state was within the non-compete zone. The competitor was located in the same building in which the defendant worked after his termination. The non-compete covered that location. The competitor did not have offices anywhere else, and all of its products were manufactured and shipped from that location. All of the marketing and promotional activities occurred on behalf of an entity active in the non-compete zone. Moreover, until the defendant was found in violation of the non-compete and ordered to vacate his office, he worked exclusively out of that one location. The close proximity of the defendant to the son’s company, the competitor, meant easy access to the latter’s operations.

The appeals court sided with the plaintiff. It noted all the competitive activity was “primarily concentrated” in the non-compete area. It also pointed out that the defendant had failed to raise this particular objection at trial, which made it difficult to separate the harm the defendant’s actions caused within the covered area from the harm caused outside the covered area at this late stage in the litigation. Therefore, the appeals court declined to limit damages based on a strict reading of the non-compete.

Another objection was that damages were too speculative and uncertain. For one, the plaintiff’s expert used the wrong measure of damages. Damages should be gross profits minus expenses, the defendant contended.

The appeals court was not convinced. Although this might be an accurate statement in cases where the only issue was lost profits and where those could be established with greater certainty, here the damage to the subject company was harder to quantify, the court observed. It also emphasized that under the applicable statute an injured party may recover damage for “the loss sustained and the profit of which he has been deprived.” In other words, the party is entitled to damages for “the loss sustained” in addition to lost profits, the court clarified.

It pointed out that the subject’s quarterly sales figures were highly inconsistent, reflecting “irregularly large and small orders from customers whose needs differed depending upon their own circumstances.” The expert vouched that his methodology for calculating damages was standard industry practice, it said. Also, the figures he obtained by way of two different methods “were in fairly close agreement.” Here, knowing the competitor’s sales did not make damages more “susceptible of mathematical precision,” the court found. It noted the expert’s explanation that there were many reasons for the competitor’s sales numbers to be lower than expected over the short term. However, the expert also explained that, when traced over time and averaged, they would eventually align with the numbers he used in his model.

What’s more, the trial court recognized the “significant and generous assumptions” the expert used to develop his damages model and substantially discounted damages by awarding only 60% of what the plaintiff asked for, the appeals court said.

The defendant further claimed it was error for the trial court to award damages for time beyond the expiration of the non-compete.

At trial, one of the owners and the plaintiff’s expert claimed the date specified in the agreement became almost meaningless once the defendant’s improper actions enabled the competitor’s early entry into the market. The expert extended damages past the end of the non-compete because the premature competition did not give the subject company sufficient time to prepare for the competition. Had there been no early competition, the expiration date would be “a big date,” the expert said. But since there was a violation of the non-compete, the agreement’s expiration date was no longer important; “the damage had already been done.”

Approving of this argument, the appeals court found it was not legal error for the trial court to award damages for lost sales beyond the agreement’s expiration date. The evidence showed that customers lost to the competitor were not likely to return to the subject company. The court noted again that damages in this case were not easy to measure precisely, and the trial court already “gave the defendant a substantial break” by denying damages for all of the years the plaintiff claimed. The appeals court upheld the award.