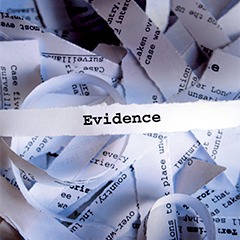 What goes around comes around. In a contract action, finance professionals made one bad decision after another, until the case collapsed under a Daubert challenge.

A married couple owned and operated a small supermarket chain. The wife, an experienced CPA, was in charge of the books. On the brink of filing suit against the defendant, a wholesale distributor, for the alleged breach of a supply agreement, she destroyed all financial records. During her deposition, she said she “threw [the] records out.” She specified “the paper copies went in the trash” and the business computer was “thrown out” as well. The court called this impropriety “the most infamous plot twist in the life of this six-year-old litigation.”

Destroying the evidence backfired when it came to showing damages. The plaintiffs retained two experts—one a J.D., MBA and the other a Ph.D., MBA—who calculated losses by way of a discounted cash flow (DCF) analysis. They prepared two joint reports, one in 2011 and one in 2014. Since they originally had no reliable data from the plaintiffs, they decided to use one of the defendant’s sales projections from 2007 (prior to the litigation) for their cash flow calculation. The projections appeared in an internal document termed “pro forma.” According to the defendant, the sole purpose of the pro forma was to help the defendant decide whether to enter into an agreement with the plaintiffs. It was never intended for projecting sales or for use in a damages calculation. The pro forma pegged the plaintiffs’ sales at $150,000 per week. But even before the plaintiffs’ experts prepared their first expert report, the defendant had revised its projections after learning that the plaintiffs’ sales were no more than $120,000 per week.

Also, after the plaintiffs’ experts submitted their 2011 report, the plaintiff attorney was able to retrieve data that confirmed weekly sales were about $120,000. Inexplicably, in their subsequent 2014 report, the plaintiffs’ experts insisted on reusing the 2007 pro forma figures rather than the actual, re-created sales figures. Both experts admitted that they had not independently verified the numbers. “I did not project anything. I used [the defendant’s] report,” one expert said. And “I think we’ve tried to make that totally clear to everyone through this whole matter that the basis for our calculations are numbers provided by [the defendant].… I relied on their expertise in that field.”

In its Daubert motion to exclude the entire testimony, the defendant claimed the plaintiffs’ experts took a “no questions asked” approach when selecting the inputs for their DCF analysis. They used weekly sales projections that were “grossly” overstated and that the defendant itself had rejected. By relying on the inflated figures, the plaintiffs’ experts created over $1.3 million in annual sales “out of thin air.” The effect of this improper extrapolation was further compounded with each year projected into the future, the defendant said.

The court granted the motion. Experts who do not independently test the accuracy of data failed the jurisdiction’s Daubert reliability requirement, it said. It also found the experts’ decision was self-serving. Using the contested pro forma “unquestionably yielded a significantly higher damages estimation than what would have resulted had the experts conservatively employed the actual data.” The damages analysis suffered from the “garbage in, garbage out” problem, the court concluded.