Relief from Student Loan Debt: What Are the Tax Implications? 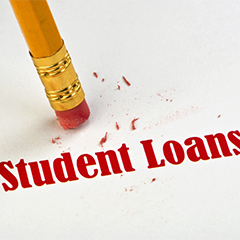 These days many college students are leaving school with an overwhelming amount of debt. However, there are some cases where student loans are discharged (also known as being cancelled or forgiven). In other cases, these loans are paid off by an employer. With both of these actions, there are tax consequences for the student loan borrowers. The tax implications will be explained, but here is some necessary background information.

The general rule for federal income tax purposes is that a taxpayer’s gross income includes any cancellation of debt (COD) income, unless one of several tax-law exceptions applies. The availability of exceptions (found in Section 108 of the Internal Revenue Code) depends on various factors such as the use of the loan proceeds and the borrower’s financial condition at the time the “COD event” occurs.

Here are some of the exceptions:

The closed school procedure.  If a student was attending a school at the time it closed or if the student withdrew within a certain period before the closing date, the Department of Education can discharge a federal student loan. COD income from federal student loans that are discharged in this situation are tax-free and shouldn’t be reported as taxable gross income on the borrower’s federal income tax return.

The defense to repayment procedure. Under this procedure, the Department of Education is required to discharge a federal Direct Loan if a student borrower establishes, as a defense against repayment, that the school’s actions would give rise to a cause of action against the school under applicable state law. Federal Family Education Loans can also be discharged under this procedure if certain additional requirements are met.

Under the procedure, there’s no statutory rule that provides tax-free treatment for COD income from loans that are discharged. But the taxpayer (student loan borrower) may be able to exclude COD income amounts under other tax-law exceptions (such as the aforementioned insolvency exception or bankruptcy exception) or under an IRS-approved nonstatutory exception (such as the one for Corinthian College student loan borrowers, as explained below).

One College Case and Tax Relief for Student Borrowers

For students that took out loans to finance attendance at schools owned by Corinthian Colleges, Inc. (CCI), the Department of Education has been discharging federal student loans. The discharges are made under the Closed School or Defense to Repayment discharge procedures, based on misrepresentations made by the school. The government estimates that more than 50,000 borrowers may be eligible for discharges under this program.

CCI has been the subject of multiple state and federal investigations regarding whether it misled students about its financial condition and its job placement rates. CCI sold more than half of its campuses in late 2014 and then abruptly closed its remaining schools in April of 2015. These actions left some 16,000 students in limbo. CCI filed for bankruptcy in May of 2015. Afterwards, the Department of Education announced federal student loan relief for affected students.

The IRS states in IRS Revenue Procedure 2015-57, that taxpayers who took out federal student loans to attend schools owned by CCI qualify for tax relief if the loans are discharged under the Department of Education’s Closed School or Defense to Repayment procedures. These taxpayers don’t need to recognize taxable gross income as a result of the discharges. In addition, the IRS states that these taxpayers aren’t required to increase their federal income tax or taxable income to account for higher education tax credits, deductions for tuition and fees, and deductions for college loan interest that were claimed based on expenses financed by the discharged loans.

Student Loans Paid Off by Employers

As a fringe benefit, some employers pay off all or a portion of student loans incurred by their employees. These loan payoff programs are often conditional on the employee working for the employer for a certain number of years.

However, it’s taxable compensation when an employer makes payments on behalf of an employee, it’s not a COD event. Student loan amounts that are paid by employers are simply treated as additional salary received by the affected employee. As such, these amounts are subject to federal income and employment taxes and possibly state income tax too.

It’s important to understand both the advantages and possible negative consequences of student loan discharges. If your employer pays off your federal student loans, that’s a great fringe benefit. However, it’s not necessarily good news from a tax perspective.

If your business is considering offering student loan discharges as a fringe benefit, contact Filler & Associates to learn more about the process and any tax implications.