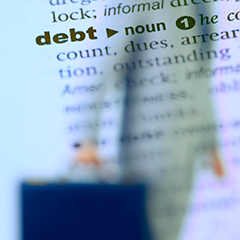 The company was a healthcare staffing agency that the wife set up in 2005. The wife was its president, and the husband was responsible for payroll processing and invoicing. Throughout the company’s history, the wife ran into problems with the Internal Revenue Service for failing to pay payroll taxes. She defaulted repeatedly on a formal repayment plan the agency put in place, but she made “good faith” payments. To keep the business operating and deal with its debt, she secured several loans. At the time of divorce, the business had accumulated approximately $200,000 in debt.

At trial, both parties presented expert testimony. The husband’s expert was a CPA and credentialed business valuator, who also was certified in financial forensics. She was experienced in testifying in a litigation setting in business valuation matters. She determined that the company’s fair market value was $230,000, notwithstanding its debt. She acknowledged that, for the company to have any marketable value, it would need to be a going concern.

The wife’s expert was an experienced CPA with no business valuation credentials. His practice specialized in working with “problem tax clients,” he stated. He also said he had performed business valuations for buyers and sellers. Further, he had represented the company in its dealings with the IRS and was “intimately familiar” with its income, expenses, and the nature of its tax debt. The source of the company’s financial problems was “mismanagement,” he acknowledged. He concluded the company was no longer a going concern and assigned zero ($0) value to it.

A related issue was how to treat the business’s $200,000 in debt stemming from the wife’s failure to pay payroll taxes. The husband argued, under controlling case law, the debt represented marital waste. By her conduct, the wife had squandered marital assets.

The trial court disagreed. It allowed that the wife’s decision not to pay payroll taxes “wasn’t a very smart business decision, in fact, it was probably very bad.” It likely could “cause the collapse of this company,” the court added. But the court decided to treat this liability as marital debt subject to equal division. Both spouses worked for the business, and the husband, almost from the beginning, was aware that the taxes remained unpaid. The husband, in fact, testified the debt did “not really” create a problem between him and the wife, the court noted. And it pointed out that the wife made continuous, albeit unsuccessful, efforts to pay down the debt.

Post-trial, the husband filed a motion for reconsideration, arguing that the opinion of the wife’s expert was inadmissible under the state’s statute on expert testimony. That statutory provision essentially adopted the Daubert standard on reliability. The wife’s expert lacked the necessary business valuation expertise and was unqualified to testify, the husband contended.

The trial court allowed that the husband’s own expert was “eminently qualified” and “did a very good job.” She “might have come out ahead,” had it been a question of who was “the better expert on business valuation.” But, given the company’s ever-increasing liabilities, it was not a going concern, the trial court decided. Accordingly, the court denied the husband’s motion.

The husband appealed the judgment with the state Court of Appeals. He argued the trial court committed two errors. One, it admitted the opinion of the wife’s expert even though that expert had less business valuation experience and fewer credentials and professional affiliations than the husband’s expert. In that regard, the husband also noted the wife’s expert based his opinion only on the expert’s experience working with the company and on the company’s financials. This narrow approach made the expert’s opinion unreliable. In contrast, the husband’s expert used a “broader array of data and valuation methods,” the husband contended.