State Tax Court Trips Over Its Own EO Analysis 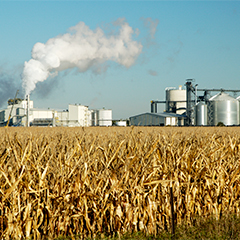 Quantifying external obsolescence (EO) poses a challenge even for experienced appraisers. No wonder the Minnesota tax court recently got into trouble when it rejected the analyses of the experts and created its own methodology.

Assessment dispute: The owner of an ethanol plant—a special purpose property—attacked the county’s assessment in tax court. One issue was EO, described as “the measurement of a property’s loss in value as a result of factors beyond the physical boundaries of the property and beyond the owner’s control.”

The valuation experts on both sides agreed that, during the three valuation years at issue, the facility incurred losses because of “prevailing negative industry conditions.” The company’s expert proposed a 33.3% reduction in the assessment for each of the years. This proposal was based on a 40% decline in commercial market values generally and industrywide decreases in the profit margin on one gallon of ethanol as a result of overcapacity, lower demand, and the increased price of corn, the main feedstock for producing ethanol fuel. The county’s expert proposed decreasing reduction rates, from 45% in 2009 to 35% in 2010 and 25% in 2011. He considered four transactions involving ethanol plants. To determine the EO inherent in each transaction and extrapolate it to the subject facility, he compared the price paid per gallon of capacity to the cost of construction. He also considered overcapacity and deteriorating profit margins.

The tax court rejected the analyses of both experts. It said the company’s expert failed to tie the claimed industrywide trends to its facility and failed to show that the value of “this particular plant declined simply because the market value of other commercial properties declined.” The county’s expert failed to consider the machinery and equipment included in the sales and differences in market conditions, location, and quality of improvements.

The company appealed the findings to the state supreme court. The high court noted that even though the tax court need not accept the valuation of either side’s expert, it must “adequately explain its rationale and the factual support in the record for its conclusions.” Here, it was unclear why the tax court decided to base its entire EO calculation on capacity alone when both parties’ experts considered capacity as only one factor in the analysis. Also, it was a mystery why the tax court “rejected entirely the decline in ethanol profit margins that both parties’ appraisers found to be a primary consideration in determining external obsolescence,” the high court said. It ordered the tax court to revalue the plant.

Takeaway: In sending the case back to the tax court, the high court noted “the complex and unique valuation challenges in calculating external obsolescence.” If a tax court decides to brush aside expert opinion on EO, it must articulate why it does so and provide evidence that supports its alternative method.