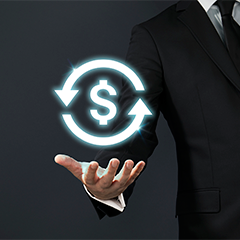 The exchange of intangible property involves a two-part test. Yes, you can arrange a tax-deferred exchange of your company’s intellectual property — for example, copyrights, patents or trademarks — with another company. However, the IRS imposes strict requirements on such “like-kind” transfers and requires a specific analysis for each transaction.

Generally, no taxable gain or loss is recognized on the exchange of like-kind assets held for productive use in a trade or business or for investment, according to section 1031 of the Internal Revenue Code.

Often, like-kind exchanges are used with real property but can be used for some other investment or business assets. Buildings, land, machinery, trucks, aircraft and rental houses are common examples of tangible property that might qualify. Like-kind assets can also include certain intangible assets such as patents, copyrights, trademarks and licenses. In one case, for example the IRS ruled the exchange of FCC radio licenses for an FCC television license was a like-kind exchange under Section 1031. (IRS Technical Advice Memo 20035005)

However, Section 1031 does not apply to exchanges of inventory, stocks, bonds, notes, other securities or evidence of indebtedness, or certain other assets. Also, exchanges of partnership interests do not qualify as exchanges of like-kind property.

According to the IRS, properties are of like-kind, if they are of the same nature or character, even if they differ in grade or quality. A like-kind exchange is reported on a form that is filed with your tax return, even though no gain or loss is recognized.

One IRS ruling: A company grouped all of its patents into four broad categories of property — Composition of Matter, Machine, Manufacturing and Process. Accordingly, it wanted to swap a patent for a process for another process patent, a machine patent for a machine patent and so on. The company also claimed like-kind treatment for exchanges of trademarks and trade names.

If properties are included in the same class, the IRS permits tax-deferred swaps of tangible personal properties that are like-kind. But this won’t work for intangible properties. In that case, a two-part test is used to determine:

The IRS, in a Technical Advice Memo, said that matching patents by product classes already specified under regulations is a reasonable method to satisfy the second part of the test. However, the IRS found no authority for the company’s proposed matching scheme. The tax deferral for like-kind exchanges requires specificity and analysis on an item-by-item basis, rather than on a global basis. Result: The IRS ruled the patents couldn’t be exchanged tax-free.

Similarly, the IRS rejected the claim that all trade names and trademarks should be considered like-kind regardless of use, appearance, form or origin. All trademarks and trade names are not created alike. (IRS TAM 200602034)

Definitely consult with your attorney and tax adviser before entering into a transaction, because like-kind exchanges under Section 1031 of the tax code are quite complex.