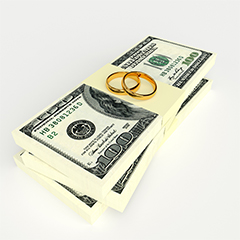 Can a solo practice have commercial goodwill, and how do fair market value and the notion of a covenant not to compete (CNTC) fit into the picture? A recent Texas divorce case raised all of these questions and resulted in a predictable outcome.

Non-transferable goodwill: The husband was a licensed financial advisor. At trial, his expert emphasized the fact that sales depended on the husband’s cultivating his own clients. Trust in the husband’s advice was one reason why it would be difficult to transfer the clients to another professional. Also, the husband sold products based on his evaluating a client’s needs.

Under an income approach, the expert found the business was worth $443,200. At the same time, he said that under the applicable fair market value he “went straight to the net assets of the business” because, without a noncompete agreement in place, “nobody would pay a penny more than the net assets of the business.” That value was only $27,000. The husband was unlikely to sign a noncompete for less than $500,000 to $720,000. This amount “would be a proxy for the intangible value of [Husband’s] personal goodwill” based on using an income or market approach.

He added that, when valuing a solo practice, he did not assess “any divisible goodwill” because the relationship between the practitioner and the client was “so strong and so paramount in driving the business.”

The wife’s expert used an excess earnings approach, which, he claimed, for years the IRS and the courts have accepted for valuing small, professional practices. Determining personal goodwill required determining what the risk was to a potential buyer of losing customers. In this case, it was 25% of the calculated value. This was the only amount the expert attributed to personal goodwill. After discounting the capitalized net income by 25% and adding back in the cost of the fixed assets, he concluded the business was worth nearly $413,700.

The husband’s expert successfully attacked the use of the excess earnings method. It was disfavored and, if used at all, was only appropriate for businesses with tangible assets. Here, the business had few tangible assets and they were not instrumental in generating income.

The trial court credited the husband’s expert and found the business was worth $27,000. The appeals court affirmed, noting, among other things, that the wife’s expert never explained how any commercial goodwill could be attributed to the business “separate and apart” from the professional’s personal skills, ability, and reputation.

Inequitable outcome: Bob Dohmeyer (Dohmeyer Valuation Corp.), argued that too many valuators don’t understand the relationship between a noncompete and personal goodwill, says this decision proves the point. The husband’s expert shows there is significant “value” in the business but then claims “the estimated fair market value of the company is limited to the adjusted net book value of its assets as of the valuation. In other words, a hypothetical buyer of the company would not be able to rationalize paying more for it than the adjusted book value of its assets if [Husband] remained in competition with it since the buyer would have to compete for the existing client base.”

According to Dohmeyer, the point he has made in his writing and successfully in court is that the business is not going to be sold. The current owner is going to keep the business after the divorce, and, therefore, the value that exists will not be “competed away.” If folklore trumps common sense, the husband gets the business and a low valuation—a windfall.