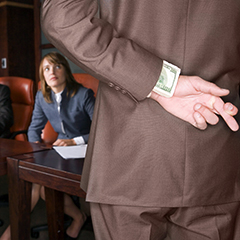 It does not pay to fudge on an expert report. That’s the message from a court in a state statutory appraisal action in which discovery evidence cast doubt on the expert’s truthfulness and independence.

Arm’s-length transaction: When a broker raised the possibility of a sale to two related construction companies that had run into dire financial straits as a result of the economic downturn, they agreed to the deal. The sale was deemed to be arm’s length. But two minority stakeholders objected to the transaction, and one of them was the companies’ former CFO, CEO, and chairman.

The sale price was $75.01 per share, which the objector claimed did not represent the fair value of his shares. At trial, both parties offered expert testimony from CPAs who also were credentialed business valuators and who agreed that in this instance the net asset value approach was the preferred valuation methodology. But their differing treatment of the companies’ accounts receivables and “backlog” resulted in a big value gap. Backlog referred to “future work that the [companies] had contracted to do but which had not yet been completed.”

Expert adopts client’s valuation: The trial court discredited the testimony from the objector’s expert. It noted “clear errors” in the expert’s report, which the companies’ expert had corrected, and it questioned the independence of the appraiser based on a letter from the appraiser to the objector and his counsel and the objector ’s responses to discovery questions from the opposing side. This discovery evidence suggested that the appraiser used the client’s valuation as a “starting and stopping point,” the court said. Also, the expert failed to account for the obligations the company earlier had incurred in connection with substantial layoffs and which it could not meet at that time. The court pointed out that “such reporting is clearly required under all applicable standards for business value reporting.” And the expert did not disclose or discuss the assumptions underlying his accounts receivable and backlog calculations.

The trial court adopted the company expert’s valuation and the state Court of Appeals affirmed, finding the trial court gave detailed reasons why that valuation was more credible.

Takeaway: Nothing beats an expert’s careful, honest work and knowledge of the applicable discovery rules. Here, the expert testimony self-destructed due to technical errors and claims that a skilled opposing attorney could easily prove to be flimsy.