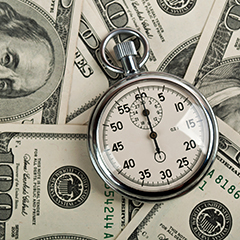 A Tax Court memo resulting from a transferee liability case includes an informative discussion of the valuation methodologies the parties’ solvency experts used to determine the company’s fair market value at the point when various contested transfers of payment took place. The court’s analysis as to the merits of the valuations is short, but it suggests the court found the assessment of the IRS’s expert more credible. Even though the IRS failed to establish liability for all of its claims, it was able to show insolvency for three out of the five relevant years.

Pinpointing insolvency. The petitioners were two minority shareholders of a Florida concrete company that flourished during the home construction boom of the early 2000s but was insolvent by the end of 2007. The company was under the control of two majority shareholders, who, from 2003 to 2007, siphoned off most of the company’s cash. For 2003 and 2004, the company filed fraudulent federal income tax returns; for the subsequent three years, it filed none. Neither of the petitioners played a role in managing the finances of the company.

An eventual IRS audit found the company owed more than $120 million in taxes, penalties, and interest. Since the company could not pay, the agency agreed to an installment plan requiring monthly payments of $70,000 per month (for more than 150 years!). Under the Internal Revenue Code’s Section 6901, the IRS also went after the shareholders to recover as much as possible for alleged illegal money transfers. While the IRS reached agreements with the majority shareholders as to recovery under transfer liability, the petitioners challenged the agency’s claims in the United States Tax Court.

Section 6901 provides the Service with a remedy “for enforcing and collecting from the transferee of the property the transferor’s existing liability.” To establish the requisite liability, the IRS looks to applicable state law, in this case to the Florida Uniform Fraudulent Transfer Act (FUFTA). The IRS argued that several payment transfers to the petitioners represented actual and constructive fraud, but only the constructive fraud theory had any traction with the court. Under that theory, the IRS needed to show that the company received less than reasonably equivalent value for the transfers at issue and the company was insolvent at the time of transfer. Both sides retained solvency experts to determine the company’s enterprise value and by extension the point at which it was insolvent—a key issue in the case.

The second set of transfers included dividends the company gave to all the shareholders based on the percentage of stock ownership, which the petitioners reported on their individual returns. The dividends were for 2005, 2006, and 2007.

He also performed a backup analysis using the market approach to value the company’s assets. He said it was appropriate to use the revenue-to-sale-price ratio because “that is what most buyers use.” He found 13 sales of companies similar to the subject company. He explained that he adjusted the sales price for each company to account for the subject’s financial mismanagement and also applied a 25% key man discount (the court’s opinion includes no details on the reasoning behind it). For each company, he then divided the five-year average of revenues by the sales price. He determined that the median revenue-to-sale-price ratio was 0.9. Finally, he applied this ratio to the company’s average revenue for the five-year periods ending on each valuation date. He concluded that the value of the company’s income tax liabilities exceeded the FMV of the company’s assets by the end of January 2006 and that the company remained insolvent through the end of March 2007.

Three-pronged valuation approach. The petitioners’ expert used three methods, weighting them evenly at 33.3%, to compute a weighted market value of invested capital. From that value, he subtracted debt and liability to arrive at an equity valuation.

He explained that a willing buyer and willing seller would have relied on the available management forecasts and used estimated revenue growth or a long-term growth rate forecast when there were no management forecasts. He did not account for fraud in his estimates. He found that EBIT in 2002 was just over $7 million and nearly $59.8 million at the end of 2006. He calculated the rate of return on equity capital using the modified capital asset pricing model (MCAPM) and used the Gordon growth model to determine the terminal value of the company. He capitalized the projected cash flows beginning in the terminal period into perpetuity. First, he normalized depreciation, capital expenditures, and working capital requirements to match long-term expectations of revenue. Then, he normalized available cash flows (The court’s opinion does not give further specifics.)

The IRS’s expert rejected this approach because the company did not have reliable historical cash flow information on which to base cash flow projections. According to the expert, no prospective buyer would value the company using a DCF analysis.

Finally, he conducted a guideline company transactions analysis, comparing the subject company to similar businesses that had been acquired in private transactions, including mergers and acquisitions. He said he searched for similar transactions based on business descriptions. The multiples again included enterprise value divided by revenue and enterprise value divided by EBITDA. (The court’s opinion is short on detail as to the comparative analyses.)

Both experts largely agreed on the value of the company’s debts.

The Tax Court disagreed, finding these advances were compensation that the petitioners received instead of the suspended bonuses. The company never expected repayment. Since the petitioners gave reasonably equivalent value for the transfers during 2003 and 2004, insolvency for those years was not an issue. The transfers were not constructively fraudulent. Moreover, the court found that, even with the 2003 and 2004 advance payments, the company’s assets then exceeded the FMV of its debts. Therefore, it was not then insolvent.

In terms of the IRS’s fraud claim pertaining to transfers in 2005, 2006, and 2007, the court found the company “likely did not receive reasonably equivalent value” for payments to the petitioners. Under the state’s fraudulent transfer act, “a distribution of dividends that is not compensation or salary for services rendered is not a transfer in exchange for reasonably equivalent value.” Therefore, there was constructive fraud assuming the company was insolvent at the time of the various transfers that occurred during those years, the court said.

Without providing a detailed discussion of the expert testimony, the court in effect found the company was insolvent on all of the transfer dates starting in 2005, that is, once the company made dividends to the four shareholders. These large payments and the accumulation of tax liability stripped the company of its assets and rendered it insolvent, the court said. Consequently, the petitioners were liable as transferees for 2005, 2006, and 2007, the Tax Court held.

« Overpaid Sales and Use Taxes?
A Closer Look at the Excess Earnings Method »