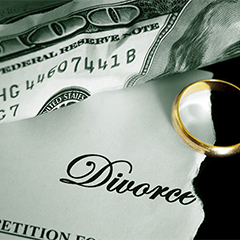 Which would you (or one of your clients) rather receive in a divorce settlement: cash or stock in a closely held business that is controlled by your former spouse? When divorce gets ugly, and it often does, cash might be a safer bet than in-kind distributions, but the answer depends on the amount of cash, the value of the closely held business interest, the relative ownership percentages and your relationship with your former spouse.

War of the Spouses

The Supreme Court of Rhode Island called McCulloch v. McCulloch (2013 R.I. LEXIS 113) “a protracted, if not epic, battle.” It took more than five years of back-and-forth litigation at the trial court level for the judge to distribute the marital estate. The primary assets were two family businesses, a textile manufacturer and an affiliated equipment and real estate holding company. Based on business valuations obtained by both spouses, the companies were worth between $106 million and $126 million.

The judge appointed a third expert to reconcile the parties’ divergent value conclusions. But appraisal of the manufacturing operation was clouded by its pending acquisition of a controlling interest in a Chinese supplier and extraordinary changes in market conditions after the December 31, 2007 valuation date.

The trial court judge awarded 25 percent of each company to the wife and 75 percent to the husband because the appraisers could not reach a consensus regarding the value of the businesses. These in-kind distributions left the wife with minority interests that:

The wife appealed, arguing that the trial court should have determined values for the businesses before distributing assets. The Supreme Court of Rhode Island agreed that the in-kind distributions essentially put the wife in an indefensible position.

Divorce courts do not customarily permit valuation discounts when appraising closely held businesses. But the appellate court concluded that it was “appropriate, and even necessary,” to include discounts for lack of control and marketability, since the trial court awarded in-kind distributions of minority shares of closely held businesses in a divorce action.

In this case, the trial court had not assigned values to the business interests, so the appellate court could not award a cash-equivalent amount. However, the state supreme court also noted that these discounts would not be necessary had the trial court simply awarded the wife an equivalent value in cash instead of the in-kind distributions.

The case was remanded to the trial court for value determinations, allowing the lower court to seek updated appraisals with more information, if necessary.

McCulloch highlights the problems that can result when a court makes an in-kind distribution of closely held stock in a divorce case, particularly when the parties receive unequal percentages and no value is assigned to the ownership interests.

The appellate court did not require a cash-equivalent payout, but business valuations to reach an equitable distribution of assets were called for. If in-kind distributions are awarded on remand, the appellate court indicated that discounts for lack of control and marketability would apply.

Even with these discounts, an in-kind distribution puts a minority shareholder at a distinct disadvantage to the spouse who runs the business, especially in such an adversarial situation. In fact, the Supreme Court of Rhode Island concluded: “An assignment of stock in a closely held corporation, which makes one spouse a minority shareholder, is generally disfavored and should be avoided whenever possible.”

Applicable laws and legal precedent vary significantly in divorce cases, depending on the facts of the case and the venue. However, judges sometimes look to other states when little relevant case law exists in their own jurisdiction. Consult with Filler & Associates, or your financial expert, to determine the best course of action in your situation.