Valuators in Taking Case Disagree Over Measure of Damages 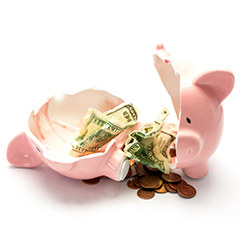 An expropriation case centering on taking a successful donut shop for public use raised fundamental valuation issues, such as the proper methodology for capturing the full extent of the owner’s loss. The city’s business valuator relied on fair market value, whereas the company’s expert contended that only a valuation based on the discretionary cash flows to the owner ensured full compensation. The trial court’s decision prompted an appeal; the appeals court decision, in turn, triggered a spirited dissent.

‘Full extent of his loss.’ In 2010, the City of Baton Rouge went to court to expropriate property belonging to Jay’s Donuts, a successful business that was organized as a C corporation and owned by a sole stockholder. The city proposed to pay $599,000 in just compensation.

The state’s constitution stipulated that in an expropriation “the owner shall be compensated to the full extent of his loss.” Under case law, compensation was not restricted to the market value of the property taken. Any compensation had to put the owner whose property was taken in an “equivalent financial position to that which he enjoyed before the taking.”

The city’s second witness was an expert in appraising real estate and billboard leasing who said just compensation was over $844,000, including $190,000 for the land taken, $155,000 for the improvements taken, $44,100 for anticipated revenue from the billboard lease, and $455,000 for the business value.

Valuation based on rule of thumb book. The city’s third witness was the business valuation expert. He affirmed the value of Jay’s Donuts, exclusive of real estate, was $496,500. Initially, he used three methods for the calculation: an asset approach, an income approach by way of a capitalization of net cash flow, and a market approach by way of a multiple of discretionary earnings. He relied on financial data, including income tax returns, from the three years preceding the taking, that is, 2007, 2008, and 2009. He disregarded the value resulting from the asset approach because it was the lowest figure. He noted that the capitalization of earnings analysis yielded a value of over $485,100 using a 15.86% rate and the seller’s discretionary earnings analysis using a 3.47% rate yielded a $540,300 value. But he based the final value—$496,500—on the company’s annual sales in 2009. He explained that he arrived at it by using a “rule of thumb” book—a guide to what businesses sell for—and found a donut shop generally was worth 45% to 50% of annual sales. However, for a very successful business, the value could be up to 100% of sales, he noted.

Jay’s Donuts, he said, was successful and profitable. It was “innovative” and had an excellent reputation and loyal customer base. It also had no debt. Accordingly, he valued it at 100% of sales for 2009. He further explained that he used “[f]air market value without any sort of discount for marketability or minority interest which translates into fair value.” He allowed that the fair market value standard of value was based on the assumption of a voluntary sale. He also noted that it was standard practice to normalize expenses, such as salary and benefits, to determine a company’s earnings because “many small businesses operate their business activities to minimize taxes.” In this instance, he explained, if the owner/operator of Jay’s Donuts received $100,000 in salary and estimated wages based on market data were $78,000, “we would actually reduce the labor that he showed on the return. And that would go to the bottom line.”

The owner of Jay’s Donuts also testified, noting that he was involved in the day-to-day operations of the company and that he worked 10-and-a-half-hour days. He envisioned working even more in the future. On behalf of the company, he tried to offer expert testimony from a CPA, who was certified in financial forensics. But the trial court disqualified the expert, ostensibly because of a misunderstanding about the expert’s methodology.

The trial court ordered just compensation of nearly $888,000. Both parties appealed. The state’s Court of Appeals found the trial court erred in precluding the expert for Jay’s Donuts from testifying and remanded the case to the trial court for a new determination of what constituted the full extent of the loss to Jay’s Donuts.

Valuation based on discretionary cash flows. On remand, the company’s expert described the “full extent of the owner’s loss” as “the value of the owner’s pecuniary position in the business enterprise on the date of taking plus any additional compensation necessary to the full extent of his or her losses.”

The first step in his calculation was defining the value of the owner’s pecuniary position as of the taking date, he said. Since Jay’s Donuts was an owner-operated business, the owner’s pecuniary position was that he was the sole beneficiary of all discretionary cash flows stemming from the business. Accordingly, the expert had to compute the cash flows and then capitalize them by using an appropriate risk rate.

He explained that for this valuation it was inappropriate to consider fair market value. Fair market value applied when there was an open-market transaction between a willing buyer and a willing seller and when neither party was under compulsion to act. Also, in using a fair market value standard of value, an expert might be making normalization adjustments to “mimic an average typical business,” which did not reflect the actual cash flow the business would have generated.

He said his calculation relied on tax returns for the three years preceding 2010 because the tax documents were certified and signed by the owner and as such represented the most credible starting point for determining the discretionary cash flow to the owner. He then adjusted the figures in the tax forms because calculations for tax purposes were not intended to calculate discretionary cash flow to the owner.

Next he used the build-up method to determine a 15.41% capitalization rate. Dividing the discretionary cash flow by the cap rate yielded $1.5 million as the value of the full extent of Jay’s Donuts’ loss, he concluded.

On cross-examination, Jay’s Donuts’ expert explained that added-back owner’s compensation included the amounts paid to the owner and his wife. Whether and how much they paid themselves was “totally discretionary because the corporation’s owners decide how they want to distribute earnings, whether as bonuses, dividends, salaries, or personal expense items.” Here, the owners chose to distribute the cash as earnings for tax purposes. He added that small businesses sought to create a “zeroed taxable event for the C corporation.”

The expert admitted that the owner was considered a separate entity from the business for purposes of receiving retirement and tax benefits and to limit personal liability. But he said that the characterization on income tax return forms did not affect the determination of the owner’s pecuniary position in this situation.

The city attacked the expert’s credibility by asking him about his valuations in other expropriation cases in which he had used the term “fair market value” and which revealed discrepancies in the capitalization rates. The expert explained that these were typos in two draft reports (out of 14), not in the final copies. He maintained the errors “do not undermine the fundamental opinions offered in these reports.” What’s more, the errors had no effect on the work he did in the matter of Jay’s Donuts. He also said he used a 15.1% capitalization rate, which aligned with the rate the city’s own business valuator used.

The trial court wanted to know why the expert added back the owner’s and his wife’s earnings to the discretionary cash flow but not the earnings of the rest of the employees. Jay’s Donuts’ expert explained that the income subject to the valuation was the discretionary cash flow to the owner generated by the business. The owner had complete discretion as to whether, when, and how to pay that income but had no discretion as to whether to pay regular employees.

The trial court did not find this explanation persuasive. In discrediting the testimony, it also noted the errors in the draft reports.

Second appeal on measure of damages. Jay’s Donuts appealed a second time to the state Court of Appeal, arguing its expert’s valuation of loss was the correct measure of damages. The trial court erred when it based just compensation on the market value of its land and business rather than the value of discretionary cash flow to the owner generated by the business.

The city contended the company’s expert erred when he added back the salaries to the owner and his wife since they were not the owners of the business. Rather, “the corporation owns itself.” The owners wanted it both ways, the city said: separate themselves from Jay’s Donuts for tax and liability purposes, but claim ownership for the purpose of valuing the business in an expropriation proceeding.

A majority of the appeals court agreed with the city. Although there was support in case law for the proposition that the award in an expropriation should be based on the business’s income, the law did not prescribe a method with which to compensate the owner. The city presented credible evidence by which to determine the compensation amount. Therefore, the trial court’s decision was not “manifestly erroneous.”

Dissent credits company expert’s valuation. One judge issued a vigorous dissent. It was inappropriate in this case for the city’s business valuator to rely on fair market value, the dissent said. The company’s valuator was the “only expert qualified to determine Jay’s Donuts’ loss of its pecuniary position in its assets based on the cash flows those assets produced.” The expert adequately explained what the discretionary cash flow to the owner was, why it should be used as the basis of value, and why its characterization on an income tax return did not change the fact that it was owned by the business and through the business by the business’s sole shareholder (and his wife). “The legal separateness of a corporation from its owners is irrelevant to whether the portion of its cash flow that it chooses to pay its owners is in fact cash flow that the business lost due to the taking,” the dissent said.

It observed that the city’s own valuator added back owner compensation and benefits to determine income but not as much as the company’s owner because the city’s valuator mistakenly looked to fair market value. The trial court also erred in discrediting the testimony of the company’s expert based on draft reports concerning other expropriation cases. According to the dissent, those were “irrelevant” to the instant case. The trial court erred when it declined to credit the valuation of Jay’s Donut’s expert and failed to increase the award to the business to $1.5 million, the dissent concluded.

« Non-Compete Agreements: What Can They Accomplish?
The Benefits of Outsourcing Accounting and Bookkeeping »