Non-Compete Agreements: What Can They Accomplish? 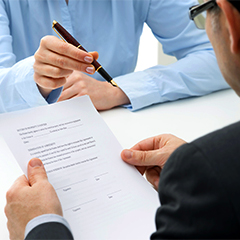 Maine-based small businesses want brilliance and innovation from their employees while they are on the payroll, but they also want their employees to keep those qualities to themselves if they leave the company. Non-compete agreements attempt to that to control any damage that could occur when an employee leaves.

With this type of an agreement, an employer lays claim to all products, ideas, and intellectual property that were developed while the employee was working for them. Also, customers and accounts the employee handled are off-limits when they leave the company. These agreements can be signed when the worker is hired, or later on.

It is a difficult task for courts to balance the interests of both the small business and the employee while deciding whether or not uphold a non-compete agreement. There are generally three areas in which the agreement must be reasonable:

Time. An employee can’t be expected to never compete again. Usually the time period that is considered reasonable is one to three years. For business such as those in the high-tech industry, it could be even shorter.

Geography. There can be restrictions in the general area where the company does business, but it generally cannot be nationwide or worldwide. There is an exception for internet or software companies that obviously do business everywhere.

Scope. The non-compete agreement cannot keep an ex-employee from making a living. While it can restrict certain core functions, it can’t prevent a worker from using the skills they’ve acquired over years of work experience.

Usually, any restrictions in a non-compete agreement are limited to the job the worker did for the small business. For example, a software engineer for one automaker can’t be restricted from taking a sales job at another manufacturer’s showroom.

Basically, a small business owner can restrict staff members from competing after they leave the company, but there are many factors to ensure the agreement is reasonable and enforceable. It’s best to consult with an attorney for help with creating the agreement, and if it seems like a worker has violated any existing agreement. Filler & Associates can help with more details of how a non-compete agreement can protect a Maine-based small business.