Considering an Expansion into Canada? 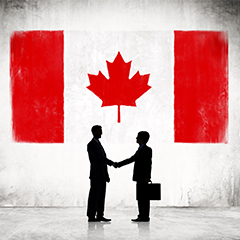 As a Maine-based small business owner, it may seem like a natural progression to expand north. Canada is a globally competitive country and an extremely cost-effective market. This makes it a good choice for businesses, especially those in the northern United States, to enter.

When considering an international expansion, there are five important issues involved in doing business in Canada:

Universal health care. In Canada, this is paid for through taxes, so businesses don’t have to carry any direct costs related to health care.

R & D tax credits. Because federal and provincial Canadian governments support research & development through agencies, financing programs, tax credits and deductions, there are tax credits to be considered. These can vary from 20 percent to 30 percent of expenditures, and each dollar of tax credit reduces one dollar of federal tax.

Language. Two official languages are spoken in Canada, English and French. The majority of residents do speak English, except in Quebec, where 80 percent of the population speak French. For Mainers especially, this can be a very easy immersion point

Environmental and social issues. Canadians are generally concerned with issues such as global warming, acid rain, pay equity and minority rights. They would most likely be looking for some of the same things in any American company they might do business with.