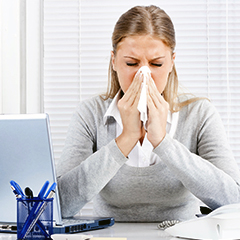 In recent months, several states and localities have passed laws to mandate paid sick leave. One way the local laws differ is in the grounds required for taking sick leave. Most cover sick leave when the employees or their family members are sick, and some also cover preventative care. Many are now granting coverage for the victims of violence, sexual assault and stalking.

Obviously, as the actions of Congress over the last decade show, there’s disagreement about the idea of making paid sick leave a national requirement. It isn’t a partisan issue; both Republicans and Democrats have held control of Congress over that time.

A recent survey from the Bureau of Labor Statistics shows that 61% of workers were receiving paid sick leave from their employers. So what motivates a business owner to offer this benefit? Generally they do it in an effort to attract and keep good workers, as well as the obvious need to keep diseases and illnesses from spreading in the workplace.

The second point is a real concern. In a 2010 study, “Sick at Work: Infected Employees in the Workplace during the H1N1 Pandemic.”, using data from the Centers for Disease Control and the Bureau of Labor Statistics, authors Robert Drago, PhD, and Kevin Miller, PhD, drew several conclusions, including:

Presumably, many of those infected co-workers ended up taking time off, or were less productive if they felt compelled to work while sick. The study didn’t estimate how many of those who remained on the job while infected lacked sick leave benefits.

The Society for Human Resource Management (SHRM) also conducted a survey, “Examining Paid Leave in the Workplace.” This one looked in more detail at sick leave policies, and found that 81% of responding employers provide some form of paid leave to employees. Note: All companies surveyed were SHRM members and were large enough to have human resource departments.

Participants in the SHRM study were evenly divided between employers who offer paid sick leave as part of a paid-time-off policy (commonly called PTO, which includes vacation and personal days), and those having a standalone sick day benefit. Here are some additional highlights of the study:

This is obviously an important and timely topic. All small business owners should review employee benefits from time to time, and realize that offering paid sick leave can help a business keep good workers, and help those good employees stay healthy. A business that doesn’t provide paid sick leave may want to consider doing so. To learn more about employee benefits, contact Filler & Associates.