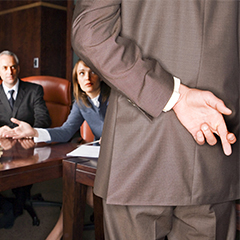 A noteworthy discussion involving reputed valuation experts over how to value stock in one of the defendants’ S corporations lies buried in a bankruptcy case that features over 20 claims of fraudulent transfers. The court ruled on bread-and-butter valuation issues, such as cash flow, capitalization rate, discount for lack of marketability, and tax affecting.

Background. The defendants established a number of direct-mailing and marketing operations. When those businesses proved a success, the defendants invested in banking institutions but foundered when the government began to investigate the institutions’ loan practices and financial conditions. To keep the banks afloat, the defendants borrowed tens of millions of dollars from a predecessor of Bank of America (BoA), the plaintiff.

In 2007, before the defendants defaulted on their loans, they reported a net worth of nearly $500 million. But, in subsequent years, while BoA took measures to collect the outstanding loans, the defendants disposed of almost all of their major assets by transferring many millions of dollars to their two children and other family members, the co-defendants. They sold stock and real estate in the U.S. and India at discounted prices to the co-defendants and gave them the remaining cash and other assets, such as jewelry. When BoA was poised to go to trial to collect on judgments totaling over $47 million, the defendants filed for Chapter 7 bankruptcy and caused their businesses to file for Chapter 11 bankruptcy. The Chapter 11 bankruptcy case is pending.

The Chapter 7 bankruptcy is the subject of this controversy. Because BoA’s interests aligned with those of the trustee and other creditors, it came to represent the estate in suing the defendants on 23 claims for fraudulent transfers. The theory was that the defendants and co-defendants carried out a scheme to move the high-value assets out of reach of creditors. To make the transfers look legitimate, they destroyed genuine documents and created false ones.

The Bankruptcy Court found the estate “amply” proved liability and fashioned a remedy for each of the counts based on expert testimony. The estate and the defendants retained respected financial professionals to support their positions. Two counts in particular raise important issues for valuators.

Before the defendants defaulted on their BoA loans, they owned a 70% interest in the company and a right to most of its income. Both children owned the remainder of the stock, 15% each. Once BoA filed suit against the defendants, the latter orchestrated two transfers to sell a controlling interest in the company to their two children for less than fair value by having the company issue new shares. The result was a dilution of the defendants’ interest from 70% to 19.8% in voting stock and from 70% to 52.0% in nonvoting stock. Transferring control of the company to the children meant that any creditor who seized the defendants’ stock would be unable to control the company and its subsidiaries. There was some evidence that the stock in the first transfer was worth $2.75 per share and the stock in the second transfer was worth $1.99. In the first transfer, the children paid only $0.63 per share for voting stock; in the second transaction, they paid $0.61 per share for voting stock and $0.60 for nonvoting stock. When the children were asked how the parties determined the price of the stock, they invoked their right not to incriminate themselves. The stock valuation was the subject of conflicting expert testimony at trial.

Income approach preferable. Since the estate wanted to obtain a cash award rather than the children’s interest in the proceeds of the company’s bankruptcy sale, it had the burden of establishing the value of the shares at the time of the transfers. The estate’s expert used both a market and an income approach.

The defendants’ expert argued that the selection included some companies that were much larger than the subject and others that were “penny stock” companies whose precarious financial situation put them at risk of being delisted from the exchanges on which their stock traded. He also questioned the way in which the estate’s expert had derived multiples from the selected set’s financial data.

The court said that, while these criticisms did not invalidate the market approach, they were strong enough to make the income approach the more persuasive valuation method.

The court found this claim was without basis. “Fully depreciated property may continue to be used or it may be discarded either with no need for replacement or with the replacement incurring a lower cost,” the court said. The estate’s expert used an amount that was smaller than the historical deduction, “presumably because the deduction available to [the company] would be declining,” the court observed. The amount of capital expenditures was independent of the depreciation costs.

The defendants’ expert said that adding the compensation to the cash flow was error since only a controlling shareholder would be able to prevent the defendants from withdrawing excessive personal payments from the company.

The court disagreed. The stock transfers conveyed control to the children, who together had control of the business. Under applicable law, there was an assumption that siblings likely would work together to control a business. Also, the company had management that was separate from the defendants. A third party acquiring the children’s interests would be able to stop the defendants from withdrawing “inappropriate” compensation, the court said. It was proper to increase the amount of income for the company by the amount of the compensation the defendants had withdrawn.

The defendants’ expert argued that not to tax affect was error. A proper valuation had to consider the taxation of the shareholders on the income of an S corp. The best way was to charge the corporation’s income with taxes at the rate reduced by the owners’ tax savings. He adjusted the company’s income by reducing “income before taxes” by 38%. The rate was based on 35% and 3% federal and state ordinary income tax rates, respectively.

The court found the defendant expert’s argument was persuasive, but he did not execute the approach he proposed. Therefore, the court did not adopt his calculation. Although the owner of stock in an S corporation avoids the double taxation imposed on an owner of an ordinary C corporation, there is taxation on the shareholder level, the court noted. “Purchasers of S corporations would in fact experience a reduction in the value of the corporations’ earnings because of the need to pay personal income taxes on those earnings, and recognizing that tax effect in valuing S corporations is appropriate,” the Bankruptcy Court said. But the defendant expert’s calculation simply reduced the company’s income by the marginal tax rate of individual owners, which was higher than the rate corporations would pay. And he failed to reflect the savings flowing from the elimination of the double taxation.

Ultimately, the court decided that, instead of correcting the defendant expert’s calculation to align with the approach—correct—to which he testified, it would use the midpoint between the defendant expert’s tax-affected net cash flow ($7.3 million) and the estate expert’s non-tax-affected cash flow ($8.5 million). According to the Bankruptcy Court, $7.9 million was the amount to be used in the estate expert’s income-based valuation.

Corrections to capitalization rate. The defendants’ expert raised two valid concerns about the estate expert’s calculation of the discount rate, the court said.

The first related to the estate expert’s use of a company-specific risk premium. The defendants’ expert explained the valuation profession disfavored its use and proposed the use of an approximately 2.9% industry risk adjustment (the text provides conflicting rates) based on Ibbotson. The court agreed.

There also was a discussion about the appropriateness of an additional small-firm risk premium. The defendants’ expert suggested a 5.9% discount, whereas the estate’s expert declined to use one, noting that studies showed that purchasers did not currently apply small-firm risk premiums. The court rejected an all-or-nothing approach and chose to apply a 2.95% rate.

The estate’s expert provided a high and a low rate for the equity risk premium: 4.36% and 5.00% based on “two reliable sources.” The defendants’ expert had no objections, but the court found choosing the midpoint rate—4.68%—”is the best reflection of the evidence.”

Based on the adjustments, the applicable capitalization rate was 11.66%, the court concluded. Applying that rate to the $7.9 million annualized cash flow resulted in a company value of nearly $68 million at the relevant time.

DLOM applies. Both experts agreed that the valuation should include a discount for lack of marketability to recognize the difficulty a seller would experience in finding willing buyers. They disagreed over the applicable rate. The defendants’ expert proposed a 35% rate. He claimed this was the appropriate rate to account for the increased difficulty of selling an interest in a business controlled by others. The estate’s expert used a 15% rate.

The court credited the estate’s expert, noting that the children received a controlling interest by way of the two stock sales.

The court next considered the percentage of outstanding stock the children received in the two transfers to calculate their individual liability. It found that they each were liable to the estate for $1.37 million for the initial stock transfer and $7.9 million for the second transfer. In total, under this count for fraudulent transfer alone, each child was liable for nearly $9.3 million.

The defendants claimed the expert’s testimony was inadmissible for various reasons. For one, he was a business valuator, not a real estate appraiser, and, therefore, lacked the qualifications to testify as to the value of this asset. But even if he were qualified, he failed to perform a proper valuation but simply “parrot[ed]” the Colliers opinions. Also, the Colliers appraisal was inadmissible hearsay.

The court found none of the objections valid. As to the expert’s qualifications, the court noted that he qualified as an expert on valuation on the basis of his extensive experience in business valuation. Even though he did not have a specialization in real estate valuation, he had been appraising businesses for over 18 years, including entities that owned real estate. Accordingly, his testimony on property values was likely to assist in the determination of the business values at issue. His approach—comparing sales of similar buildings and tracking cash flows—was accepted in the industry and lent itself to testing.

In addition, Rule 703 of the federal rules of evidence permits experts to base their opinions on information other experts in the field would reasonably rely on, “when the opinion falls within the testifying expert’s expertise.” This was the case here. The estate’s expert was capable of assessing “the appropriateness” of the work done by the Colliers experts, and he did so. He did not just convey the Colliers opinion. And even if the Colliers report was inadmissible by itself, it could come into evidence, as it formed the basis of the valuation expert’s opinion on the contested real estate. The defendants were liable for the property values the estate’s expert had determined, the court concluded.