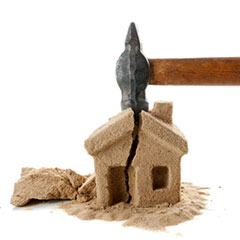 Valuation experts receive a lot of advice on how to guard against an attack from the opposing side, but sometimes an attack can come from the expert’s own client. A recent case shows how an appraiser who sued a client over unpaid fees was put on the defensive.

Costly divorce: The client hired an accounting firm for his divorce case and wanted to show that the value of his real estate business had declined during the marriage and there was no appreciation subject to division. He signed an engagement letter that specified the hourly rates for the partner in charge and staff members. The letter promised the firm would provide valuation services in compliance with the AICPA’s Statement on Standards for Valuation Services #1 (SSVS #1). The partner said that his staff reviewed more than 25 boxes of documents containing information on the client’s personal and business finances covering over 12 years. At the request of the client’s attorney, the expert prepared three reports: a valuation of the client’s interest in the businesses, an income- and cash-flow analysis, and a labor-intensive “tracing” analysis to show the client’s premarital portion of the assets. When he began to realize that most of the properties the business held were underwater, he asked counsel whether the costly additional analyses were necessary. He was told to go ahead with the work because it was critical to making a case for the client’s retention of ownership in all of his assets.

In the divorce trial, the wife’s attorney challenged the appraiser’s valuation, specifically the methodology of valuing the real estate. The expert explained he used the capitalization of earnings method to determine the fair market value of the property owned by the businesses. It required him to forecast the annual earnings from the property and determine the appropriate capitalization rate, which he said he calculated considering, among other things, the appraisal report the wife’s expert had prepared. He admitted that the report included a “restrictive use” provision. Subsequently, the wife’s attorney asked the court to exclude the testimony. However, before the court had reached a decision, the parties settled. The husband was able to hold on to all of his business interests.

Second-guessing: Fees for all appraisal reports and court testimony came to $166,000. The client only paid the initial retainer of $10,000 and an additional $12,000. The appraiser sued, prompting the client to file a counterclaim alleging accounting malpractice and professional negligence. He claimed the appraiser erred when he adopted the appraisal report the wife’s expert had submitted. When he could not find an expert to prove the malpractice claim, the client voluntarily withdrew it. During trial, the court allowed him to cross-examine the appraiser about the services the firm had provided but not about the applicable accounting standards. Regardless, the client launched into a host of allegations meant to show the appraiser breached its promises in the engagement letter. Although the accounting firm prevailed, it was exposed to public second-guessing from the client. The client appealed the $166,000 fee award, claiming the trial court erred when it barred him from showing the appraiser’s work failed to comply with the professional standard. Again, the appraiser’s divorce work came under intense scrutiny in a setting that had nothing to do with the divorce. Ultimately, the appeals court affirmed the award.

Takeaway: Watch your back at every turn. Be clear about the engagement, communicate with counsel and the client regularly, and document concerns related to the scope of the work, fees, and other potentially damaging issues. Finally, know that, even if you have a good case, litigation exacts its own price in the form of unwanted attention. To learn more about appraisals and valuations, contact Filler & Associates.