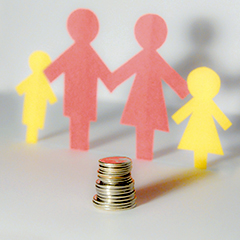 How does the law treat undistributed income from a parent’s S corporation for purposes of determining child support? This was the central question in a recent child custody case. The lower court relied on expert testimony that attributed to the owner parent income based on a CPA expert’s “excess working capital” approach. Industry data indicated the owner parent could have taken more money out of the company than he had done in the past while still maintaining a viable business, the expert said. The parent appealed.

Capital-intensive industry. The plaintiff was the sole shareholder of a business that manufactured precision gears used in the aerospace industry. It was organized as an S corp. The plaintiff explained that the industry was “majorly capital intensive” and required the company to purchase new equipment regularly to stay competitive. The purchases, which occurred almost every year, could range from a few hundred thousand dollars to over $2 million per machine. The company needed to have cash on hand.

The owner and his partner had three children and were together for 16 years. After they separated, the owner sued for custody. Child support was one of the contested issues. It first came before the Friend of the Court (FOC) referee, who held an evidentiary hearing that featured three CPAs testifying as experts on the available income for child support from 2008 through 2011. They reached different conclusions. Ultimately, the referee adopted the opinion of one expert.

Conservative business model. The expert estimated the business owner had an average income of $723,000 over a three-year period and an average income of nearly $1.1 million over a four-year period. He reviewed the plaintiff’s W-2 statements, interest and dividends, actual distributions, perks, and “additional monies available for income, or for payment of child support, that aren’t in any of the other four categories.” He also included sums the company distributed to the owner for the payment of taxes on corporate earnings retained by the company.

The “additional monies” category included a portion of what he called “excess working capital.” The expert determined the amount of “excess working capital” by using the “Bardahl formula.” He first calculated “working capital” and then determined how much the company required to pay for operating expenses. Any amount beyond this was “excess.” In his opinion, 60% to 65% of the company’s excess working capital was available for distribution in any given year. He admitted that his percentage determination was not based on any existing studies. Rather, the numbers seemed reasonable to him when compared with the company’s requirements. He also said he compared the company to other businesses and found it followed a more conservative business model. Specifically, it had more cash and less debt than other companies in the same industry. Twenty-two percent of its total assets were in cash, and it had a zero debt-to-capital ratio; in contrast, other companies kept 6% of their total assets in cash and had an average debt-to-capital ratio of 20%. He maintained that a distribution of additional capital would not hurt the company because it could assume debt to finance new machinery, rather than following its historical practice of paying with cash.

The referee adopted the expert’s opinion and recommended child support based on the determination that the plaintiff’s average monthly gross income for 2010 and 2011 was approximately $74,000. This amount included distributions to the plaintiff to meet the company’s tax liability, which the referee concluded were the plaintiff’s liability.

After the plaintiff objected to the recommendation, the trial court reviewed the matter anew. The issue, it said, was whether the FOC referee had erred when it credited the expert’s testimony. State law treats “the income of an S corporation as the income of the S corporation’s shareholders,” the trial court noted. Therefore, the expert properly considered the income of the plaintiff’s company as the plaintiff’s income. According to the court, because the expert only considered “excess working capital,” rather than all of the corporation’s income, as available for distribution, the expert’s analysis actually worked to the plaintiff’s advantage. The trial court found no error and accepted the conclusion that 60% to 65% of excess working capital was available for distribution. However, it used a three-year, rather than a two-year, average, which yielded a net monthly income of over $35,700. The trial court did not discuss the tax liability payment.

‘Historical patterns.’ The plaintiff appealed the findings to the state’s Court of Appeals, which reviewed the trial court’s order under the abuse of discretion standard.

The starting point for the appeals court was the state’s child support statute and the formula it prescribed for determining a parent’s net income. The income calculation under the formula was not the same as take-home pay or net taxable income, the court clarified. The purpose was to establish “how much money a parent should have available for support,” the court stated with emphasis. The formula provides a list of forms of compensation that courts trying to calculate the income of a business owner, executive, or self-employed person should consider closely. The concern underlying the statute is the potential for manipulation. Since business owners or executives have more control over their compensation, they may be able to “arrange compensation to reduce the amount visible to others looking for common forms of income.” The statute required courts to consider “historical patterns” when it came to making distributions to determine whether a parent used the business to shield money from child support consideration.

The Court of Appeals first found that the statute did not identify undistributed corporate profits as income available to a parent where there was no evidence that the owner parent reduced distributions in a departure from historical practices. According to the court, “it would be inappropriate to adopt a bright-line rule including undistributed earnings retained by an S corporation within the calculation of a parent’s income … in all circumstances.”

The court rebuffed the expert’s “excess working capital” analysis, which, it said, would attribute income to a parent based on industry averages. While the statute does seek to uncover what income a parent has or should have available, it does not require a parent owner to “revamp … reasonable and historical business practices in favor of alternative methods” of running the company to make more funds available.

The expert’s opinion was “problematic,” the court said. He disregarded the company’s historical practices and substituted his own judgment for that of the plaintiff as to how to manage the company. Instead of focusing his analysis on how the company was run, he focused on how the company could be run. He failed to show that the plaintiff’s management was outside the realm of the reasonable or that the undistributed profits were for unnecessary or illegitimate business expenses or ran counter to the company’s historical distribution patterns. There was no basis for his conclusion that 60% to 65% was “excess working capital,” the appeals court said. By the expert’s own admission, it simply represented his business judgment.

Further, the appeals court found the expert’s calculation of income wrongly included funds distributed by the business to the taxpayer for the payment of taxes on earnings retained by the corporation. Electing S corp status was a tax strategy, the court noted. The child support statute was clear that funds distributed for the payment of taxes under this corporate model were not indicators of what the parent had or should have available for child support and must not be attributed as income to the shareholder parent. Based on these errors, the Court of Appeals remanded the matter to the trial court for a redetermination of income available for child support.

« Be Cautious When Accepting Checks
When Does an Employee Qualify as Exempt From Withholding? »