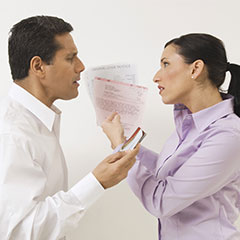 In a recent divorce case involving a series of family businesses in which the husband owned interests, the trial court faced considerable hurdles to arrive at a valuation of the marital estate. A small army of experts gave conflicting opinions on how to account for a corporation’s union pension liability and machinery and equipment and how to value the land and bond anticipation notes held by two other businesses. Moreover, the trial court had to devise a way to give the wife her share of the husband’s ownership interests. It mandated an equalization payment that proved more of a problem than a solution, considering the illiquid nature of the husband’s assets. The husband appealed the trial court’s decision.

The husband, his father, and his brother owned a large number of businesses, the primary being a closely held S corporation that did road and other construction work. Both brothers held approximately 42.25% of the stock and the father the remaining 15.5%. The other companies were LLCs that seemed to develop real estate; two of these companies owned property in a planned unit development (PUD) site. The husband held a 33% interest in the two entities. All of the companies had agreements that restricted the transfer of shares or membership interests to other persons. The wife filed for divorce in 2006 and for legal separation in 2007, but these actions did not go forward. She filed another divorce petition in 2009. The husband’s finances were “complicated.” Although in the divorce proceedings he talked about the $72,000 salary he received from the S corp. as his only income, there was evidence that he earned much more. For one, the corporation regularly made sizable annual distributions to the three shareholders through 2007. In 2007, it distributed nearly $6.3 million on gross profits of $8.1 million. In 2009, the year of the divorce petition, its gross profits were over $8.9 million, but it made no distributions; instead, the shareholders loaned it nearly $3.4 million. They later explained that they did so at the request of the bonding companies. Other evidence suggested that the bonding companies made no such request and considered the company financially very sound.

For valuation purposes, the most controversial issues at trial and on appeal arose in connection with valuing the S corp. and the two land-owning LLCs. The valuation date was 2009.

Pension obligation. One of the major disagreements among the experts in regard to the corporation was whether to reduce the company’s value to account for what the husband claimed were unfunded union pension liabilities that amounted to $4.5 million. The husband’s expert said he based the deduction on information from a construction industry group representative who said the amount reflected “estimated unrecorded economic liability associated with [the company’s] portion of the unfunded pension plans.” The expert’s report also referred to a federal requirement that employers withdrawing from a multiemployer pension plan pay their proportionate share of the pension fund’s vested but unfunded benefits. And the report pointed to a general problem of pension plan underfunding and employers having to account for an underfunded pension plan in the future when retires may withdraw more money than the plan can bear. The expert said the company’s liability was “real” and it “will have to come out of the company’s future cash flows, one way or another.”

The wife’s expert acknowledged that unfunded pension liability was a “major issue” in high-profile cases such as the General Motors bankruptcy but found it was not a concern in terms of valuing the company at issue. Although in 2009 the company’s accountants stated funded pension liabilities, they did not mention unfunded liabilities. The wife’s expert also mentioned that he had valued other construction companies and the issue of pension withdrawal liabilities under federal law “has never been even brought up in a single issue.” Also, the two events that would trigger the federal law requirements—switching from union to nonunion labor or ceasing operations in the near future—were unlikely to occur here.

A second expert for the wife also said he had never seen a valuation report handle the issue in the way the husband’s expert proposed. According to the second expert, it was inappropriate to show potential liability under federal law as an actual liability in 2009. He allowed that the issue might come up in negotiations around the sale of the company, but if it did it would be dealt with in the sales agreement, he said.

Ultimately, the wife’s expert concluded the company’s total value was $15.6 million and the husband’s interest was worth over $4.3 million. The trial court largely accepted the valuations the wife’s experts offered. In terms of the pension obligations, it declined to reduce the company’s value by the $4.5 million the husband’s expert set down. As for the machinery and equipment, the trial court noted there were flaws in each expert’s report. It rejected the “desktop” approach that informed the value of the wife’s expert, but it also found the husband’s expert had failed to appraise all the equipment the company owned on the valuation date. Therefore, the court set the value at $11 million. It concluded that the corporation had a total value of about $10.1 million and the husband’s interest was worth over $2.8 million, including discounts for lack of marketability and the nonvoting nature of many of the husband’s shares.

Land. The experts had serious disagreements as to how to value two LLCs that owned over 291 acres in the PUD site. In 2009, the land was only partially developed. The wife’s expert was an experienced real estate appraiser with extensive knowledge of the area in question. He said the presence of a major university insulated the area’s economy somewhat from the economic downturn. He tried to obtain estimates from the husband’s brother about estimated costs of improving the land in compliance with the PUD requirements but was unable to do so. He made an educated guess that costs would amount to about $2.5 million. Also, in 2006, there was a sale of 84 acres to a major hospital in the area for $150,000 per acre. Applying a discount for the costs of development, the real estate appraiser concluded the land was worth approximately $9.6 million. He based his valuation on the highest and best use of the land as development property.

The husband’s expert said that in 2009 real estate development was in bad shape. Many properties similar to the land at issue were abandoned to lenders because of the poor economic outlook. Also, the likelihood of further development was slim particularly given the PUD requirements. By his calculation, the total value of land was $1.8 million.

The trial court accepted the value the wife’s real estate appraiser offered. This meant the husband’s one-third interest in the two companies amounted to approximately $4.5 million.

BANs. A related issue was how to value bonds the company held. They were bond anticipation notes (BANs) the county had issued in 2005 in anticipation of the issuance of $7 million in tax increment financing (TIF) bonds in 2010. The county in fact issued the TIFs. Before it did so, its financial advisor cautioned the county not to guarantee repayment of the bonds through its full faith and credit and general taxing power. He mentioned the slow progress in developing the area and said the total assessed valuation of the land was far below the original projections.

In 2009, the company listed the BANs as an asset with a book value of nearly $5.8 million on its balance sheet. At issue for the valuators was what the likelihood of the county’s repaying the TIF bonds was.

The wife’s valuation expert used the $5.8 million book value given that this value appeared on the company’s financial statements. Even if the county ended up not repaying the TIF bonds in full, any loss would show up in the company’s 2021 financial statements, not its 2009 statements, he said. Also, the wife’s real estate appraiser in appraising the land saw strong development potential in the area in 2009.

The husband’s valuation expert contended the BANs’ fair market value in 2009 was much less than the book value, as the testimony from the county’s financial advisor proved. He concluded the BANs were worth $1.1 million.

The trial court considered the BANs an asset and used the $5.8 million book value.

Ultimately, the trial court determined the total value of the husband’s business interests was $11 million. There was little marital debt. Dividing the estate evenly in two meant that each spouse would receive $5.5 million. Because the wife received few liquid assets, the court prescribed an equalization payment to the wife in the amount of $4.7 million. To ensure payment, the court gave her a security lien on all of the husband’s shares and ownership interests in the various entities if the husband failed to pay the judgment in full within 180 days.

The husband did not pay but filed an appeal with the state’s Court of Appeals. He contested various aspects of the trial court’s valuation of the corporation and LLCs and the equalization payment.

FMV not required. The Court of Appeals affirmed the lower court’s valuations. As for the pension obligation, the appeals court said the trial court had testimony from two experts disfavoring a $4.5 million deduction in valuing the company in 2009, as opposed to one opinion from the husband’s expert. Therefore, there was evidence that supported the trial court’s accepting the treatment the wife’s experts proposed. The appeals court also found support for the trial court’s $11 million machinery and equipment value. It accepted the method and value the husband’s appraiser chose but increased it to account for the “extra” equipment the husband’s appraiser did not count.

As for the land appraisals, the appeals court said the case “highlights just how inexact property valuation is.” Both experts in front of the trial court presented extensive reports and reasoning to support their valuations of the LLCs’ real estate. The trial court had discretion to decide which opinion to accept. Concerning the BANs, there was no legal obligation that the trial court had to use the fair market value as opposed to book value or the original purchase price. The court’s favoring the way in which the wife’s expert treated the notes was not an abuse of discretion.

But the appeals court strongly disagreed with the trial court’s use of a security lien against the husband’s business interests to enforce the equalization payment. It recognized the difficulty of dividing interests in closely held businesses, particularly in this case, where the husband’s net worth was tied up in his stock and membership interests in the various entities. There were not enough liquid assets to award the wife her share of the marital estate and completely avoid “some continued entanglement” of the spouses in the businesses, the appeals court noted. But it also said that the trial court should have done more to limit the entanglement. One way to do this, the appeals court suggested, is to give the wife an equitable interest only in the husband’s nonvoting stock in the corporation. As a result, she would receive distributions, but she would not be able to participate in the management of the company. Consequently, the appeals court upheld the $4.7 million equalization payment and the underlying valuations but ordered the trial court to develop a less draconian method with which to enforce the equalization payment.