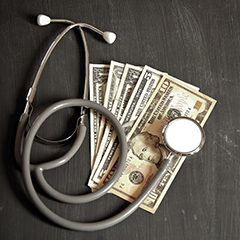 Historically, small businesses that wanted their employees to have health coverage without the hassle of a company health plan had the option of reimbursing workers for the cost of buying their own coverage or some portion of it. As long as the employee provided evidence that they used those funds for that purpose, the dollars were excludable from their taxable income.

Alternatively, companies could simply pay the premiums directly to the insurance carrier.

However, in November 2014, the Department of Labor (DOL) declared that companies reimbursing employees for medical care rather than offering a health care plan of their own is still equal to a health plan and is therefore subject to the Affordable Care Act (ACA). Those reimbursement arrangements failed to meet ACA requirements in two ways: One, group health plans have to have no annual limits on benefits, and two, there must be no co-pay for certain preventive health services. Therefore, these types of reimbursement arrangements were ruled to be noncompliant with the law.

This ruling is essentially the same thing as a 2013 decree by the IRS. The added problem though, is that beginning in 2014, companies with such reimbursement arrangements in place would be subject to a $36,500 penalty per employee.

The only remedy offered by the DOL was for companies to gross up those contributions (that is, add to them enough money to cover the tax liability employees would incur as a result of receiving the payments), plus make it clear to employees that they could do whatever they wanted with all of the money they received. In other words, they could not be required to use it to pay for health coverage.

The IRS’s latest ruling, Notice 2015-17, which the tax agency says is in sync with the most recent DOL policy on the matter, gives everyone time to catch their breath.

Specifically, small businesses with reimbursement plans will only be penalized if they keep them beyond June 30 of this year. Small businesses also no longer need to file Form 8928, which is the form that covers failures to satisfy group health plan requirements. Originally that form would have to have been filed with companies’ 2014 tax returns. This also applies to retirees and their Medicare Part B and D premiums.

Employees who own at least 2 percent of their employers’ stock (if the company is a Subchapter S corp) might come in for different treatment. Such employees were required to report the premium reimbursement payments as income on their 1040s, even though the payments were not subject to payroll tax. But those same employees could also take a deduction equal to the amount of that income, leaving them tax-neutral.

In IRS Notice 2015-17, the tax agency warns that it and the DOL “are contemplating publication of additional guidance on the application of the market reforms to a 2 percent shareholder-employee healthcare arrangement.” Until then, however, the companies are off the hook. So, too, are the employees who will continue to be allowed to deduct that income as self-employed health insurance premiums.

The Notice reconciles the IRS with a position the DOL had taken earlier — that is, declaring reimbursement plans as merely taxable payments to employees doesn’t prevent them from being deemed health plans. That means the only way to help employees secure health coverage without having a bona fide health plan is to just give each employee a raise and hope they will use it to buy their own health coverage. (Keep in mind, small business with fewer than 50 employees and full-time equivalents are not required to provide health plans under the ACA.)

Notice 2015-17 also made it clear that the ACA’s market reforms, as they pertain to this issue, don’t extend to arrangements covering only a single employee (regardless of whether that employee is a 2 percent-or-more shareholder). That means if you own your company and aren’t an employee, but have one employee and want to reimburse that person for the cost of buying individual coverage, you won’t be subject to any penalties.

For more information about how small businesses can understand these reimbursement rules, contact Filler & Associates.