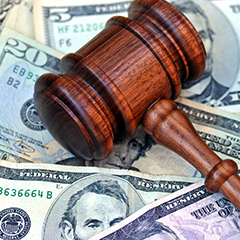 Another instance of “splitting the baby”? In a divorce proceeding, both experts used the capitalization of cash flow method but reached vastly different results in valuing the husband’s closely held company. One key difference was the cap rate, which they both generated with the build-up method. The trial court used the cap rate from one expert and applied it to the cash flow analysis of the other expert. On appeal, the wife contested the valuation, arguing that this kind of mixing and matching was inappropriate and objecting to the trial court’s application of a minority discount.

Minority or controlling interest? The husband was the president of a closely held chemical treatment company. Both he and a business partner—the company’s vice president—each held a 44.837% interest. The husband’s father, who was the original founder of the company, owned the remaining interest in the business but was selling his shares monthly to the other partners equally. The agreement specified a purchase price of $13,000 per 1.25 shares. There was evidence that the husband’s father wanted to leave the business and set a “take-it-or-leave-it” price for his shares based on the amount he believed he needed to obtain. Except for one month or two, both partners bought the stock since the agreement had gone into effect; the completion of the buyout would likely be April 2003.

The husband and his business partner jointly made business decisions, but they played different roles in the operation of the business. The husband testified that, notwithstanding his title as president, he did not have unilateral authority to liquidate any part of the business.

The wife filed for divorce in 2010, but trial took place in fall 2012. A few years earlier, the husband had indicated in a financial planning document that the company was worth $1.5 million and subsequently in a loan application that his total net worth was $2.1 million.

At trial, the parties presented expert testimony. Both experts valued the company under an income approach, performing a capitalization of cash flow analysis. The wife’s expert also conducted a transaction analysis based on the stock option agreement. She determined that, under the $13,000-per-1.25-shares price in the stock purchase agreement, each share was worth $10,400. The value resulting from the transaction approach did not increase the value of the company’s overall equity, she explained, because ultimately the value of equity derived from the transaction method was less than that resulting from the income approach. She averaged the values from the two methods. In contrast, the husband’s expert rejected the transaction method, noting that the price in the stock option agreement “grossly overvalued the company.” He valued each share at slightly below $2,300. Both experts agreed that the asset approach was inappropriate in this instance because the husband lacked the power to liquidate assets unilaterally.

Both experts used the build-up method (BUM) to generate their capitalization rates. Their source for bound market capitalization was Morningstar, but they disagreed over the applicable subcategory. The husband’s expert chose “10z,” saying it was designed for companies such as the subject company—“the smallest of the small.” But the wife’s expert explained that, based on her understanding of valuation literature, it may not be necessary to use “10z” when valuing a small company because companies within “10z” may be riskier than the company that is being valued. She selected “10b,” she said, “primarily because it does include a large number of companies.” As a result of their differing selections, the husband’s expert applied an 11.77% size risk premium, while the wife’s expert used a 6.1% premium.

Moreover, when testifying, the wife’s expert characterized the husband’s interest in the company as a controlling interest. She recognized that the husband and his business partner were equal decision-makers but said a provision in the stock option agreement provided that the husband eventually would inherit any shares that his father still had in the company at his father’s death—notwithstanding the near completion of the buyout. The husband’s expert, on the other hand, said both partners were minority interest holders and applied a 25% minority discount as well as a 28% marketability discount. The wife’s expert stated that experts differed on the use of a minority discount in the capitalization of cash flow method:

Many believe apples to apples that you should make controlling or normalizing adjustments to the cash flows and then also use the discount rate, which is based on the build-up method and … could result in a control or a marketable minority interest.

Finally, both experts agreed to submit to a test of reasonableness. Specifically, the respective valuations should be a multiple of four to nine times EBTIDA for companies similar to the subject company. The valuation from the wife’s expert resulted in a 4.8-to-5.0 multiple. The amended valuation the husband’s expert proposed produced a 3.5 multiple and as such fell below the 4.0 mark.

The trial court generally adopted the amended valuation the husband’s expert submitted, including his capitalization of cash flow calculation and the minority and marketability discounts, but it directed that the capitalization rate the wife’s expert determined be applied to the calculation (the opinion does not explain why). The recalculation yielded a total value of $277,000 for the husband’s interest.

The trial court agreed with the husband’s expert that the stock option agreement was not indicative of the value of the company since it did not result from an arm’s-length transaction. The court also expressed concern that the wife’s expert valued the equity on a controlling interest basis. A 44.837% interest in a company does not amount to a controlling interest, “especially when the co-partner has exactly the same ownership interest,” the trial court pointed out.

Split on minority discount. The wife appealed the trial court’s findings to the state’s Court of Appeal. She objected to the valuation for a number of reasons.

First, she claimed that, in giving greater weight to the valuation of the husband’s expert, the trial court failed to abide by the “Delaware Rule,” which requires the use of three methods—market value, asset value, and investment of earnings value—to determine the fair value of a dissenter’s shares in a closely held corporation.

The Court of Appeals noted that divorce was different. Whereas the Delaware Rule applied when it came to valuing a dissenting minority shareholder’s shares, there were other acceptable ways to value a party’s interest in the context of divorce, including use of the nine-factor test that appears in Revenue Ruling 59-60. Here, the husband’s expert specifically referenced the factors in his valuation and the valuation from the wife’s expert’s showed she considered comparable factors. Both experts rejected the asset approach. Consequently, the appeals court rejected this argument.

Second, the trial court erred when it decided to apply the capitalization rate the wife’s expert determined to the cash flow analysis the husband’s expert performed, the wife stated. Moreover, she claimed that, even though the wife’s expert characterized the husband’s interest as controlling, she did not apply a control premium. It, therefore, was improper for the husband’s expert to apply a 25% minority discount because the minority interest was assumed in the expert’s capitalization of cash flow analysis.

The appeals court deferred to the trial court’s assessment of the weight and credibility given to each of the experts. The lower court specifically credited the cash flow analysis the husband’s expert had performed and specifically stated that the capitalization rate the wife’s expert calculated was the most appropriate rate, the appeals court said.

Third, the wife argued that the trial court erred when it failed to consider the price the husband and his business partner paid to buy the founder’s shares under the stock purchase agreement.

The appeals court disagreed. The trial court specifically noted that the husband’s father was able to “operate in a vacuum” and that the buyout was “no where close to an arm’s length transaction.” There was no record that a buyer other than the two partners was willing to pay that amount, the appeals court pointed out.

Fourth, the wife claimed that the husband’s valuation failed the test of reasonableness.

The appeals court said there would be merit to this concern if the trial court had adopted the valuation of the husband’s expert in its entirety. Instead, the lower court required a recalculation that resulted in a higher overall valuation. The final $277,000 value was a 5.71 multiple of the expert’s amended capitalized value of invested capital, almost $1.6 million, and met the reasonableness test. Moreover, the trial court had discretion “to place a value on a marital asset that is within the range of the evidence submitted.”

Finally, the wife maintained that the trial court erred by not taking into account the husband’s prior statements as to the value of his ownership interest in the business. That claim also had no traction. The self-reporting statements took place years before the filing for divorce, they were vague, and they did not support either expert’s valuation, the court pointed out. For all these reasons, it affirmed the trial court’s valuation of the husband’s ownership interest.