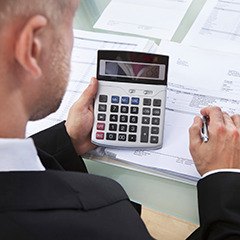 Calculation reports periodically become a point of contention in litigation in trial and appeals courts. Courts have responded in different ways to questions about their usefulness and reliability. A recent case explores the issue of whether expert testimony based on a calculation of value is admissible under Daubert.

Prior to marriage, the husband founded a company that marketed and sold Steel Seal, a car repair product that sealed blown head gaskets. The company had three patents related to the product. Subsequently, the husband transferred his membership interest to his son. During the marriage, the wife made two loans to the company, totaling $350,000. The company books later showed additional creditors—the husband and companies he had set up—for loans in the amount of $210,000. After the divorce, the husband caused the son to sign an agreement designating the husband as a secured creditor, which the husband used to take possession of the company’s assets. The son later died.

The wife sued the husband and his entities alleging fraudulent transfer of the company’s assets and the proceeds of the assets. Specifically, she claimed that he took the business’s inventory, which was worth over $490,000; the husband claimed it was $110,000. She also accused the husband of orchestrating the fraudulent transfer of licensing rights to sell and produce Steel Seal to one of his companies such that he continues to benefit from the proceeds of the fraudulently transferred assets. In contrast, by the time the company went out of business, the wife had recovered only about $53,500.

Although the court found the transactions had “badges of fraud,” it denied the wife’s summary judgment motion because there was an issue for trial as to what assets were transferred and what their value was. The wife’s summary judgment motion included expert testimony on the value of the company’s assets on the transfer date, which the defendants challenged in a pretrial Daubert motion.

SDE-based calculation. The proposed testimony was based on an expert report in which the wife’s expert stated that he prepared a calculation of value of the company—as opposed to a more extensive opinion of value resulting in a conclusion of value. During his deposition, he explained that he had had limited information about the company’s financial records and, therefore, was unable to do a full appraisal. He explained that one way to value an asset or a company is to examine the sale of comparable businesses to determine a multiplier based on the annual seller’s discretionary earnings (SDE) of each business. In this case, he was able to calculate the total personal withdrawals from the company and a related company that had acquired the licensing rights to Steel Seal for the relevant years. He classified the withdrawals as SDE. He also found that comparable businesses were valued at an average of 2.92 times the annual SDE generated by the companies. To value the subject company, he applied the 2.92 multiple to the average SDE he had determined for the two companies at issue. He concluded that a reasonably equivalent value for the transfer of the company’s assets was approximately $1.8 million.

The defendants claimed that, since the expert merely completed a calculation report, the testimony failed two of the Daubert requirements: reliability and fit (or relevance). Therefore, they asked the court to preclude it.

The court found that both types of engagement are approved by the American Institute of Certified Public Accountants (AICPA) and there was no reason to prevent the trier of fact from hearing the expert’s testimony. According to the court, he explained why he could not perform a full valuation, and his methodology and assumptions were clear. Any questions as to the specifics of the testimony went to its weight and should be the subject of cross-examination. The testimony based on the calculation of value was admissible under Daubert, the court concluded.