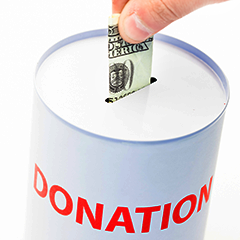 A taxpayer handed the IRS an easy victory when he challenged the government’s denial of his claim for a charitable contribution deduction related to his S corporation’s donation of a neglected apartment building. The dispute centered on meeting certain requirements of Section 170 of the Internal Revenue Code (IRC). The Tax Court found the taxpayer’s petition leaned on two severely deficient appraisals from nonqualified appraisers and was rife with misrepresentations as well as omissions.

The taxpayer-petitioner was the sole shareholder of an S corp that owned two apartment buildings that he and his sister originally had bought at auction from the U.S. Department of Housing and Urban Development (HUD) by way of a HUD mortgage. In 1983, the total price was $353,000. In the 1990s and 2000s, the buildings failed every inspection HUD undertook to ensure that they were in a “decent, safe, and sanitary condition.” A 1999 agency report said that they were in a “deplorable” state. Before HUD could complete foreclosure proceedings, the petitioner paid off the balance of the mortgage. About a year later, both sides sued each other, claiming a breach of the original HUD contract. In August 2008, the U.S. Court of Federal Claims found for the government. In September 2008, the petitioner donated one of the buildings to Volunteers of America (VoA) for nominal, $1, consideration. At that time, only six of the building’s 34 units had tenants. VoA had a policy of finding a prospective buyer before accepting a donation to minimize its liability exposure.

VoA’s real estate agent described the apartments as “pretty rough” and said most of them were “not rent-ready.” He noticed a broken elevator, a leaking roof, “heav[ed] up” floors, missing kitchens, and one completely burnt unit. Ultimately, VoA sold the property quickly for $60,000 to the only interested buyer.

On their 2008 tax return, the petitioner and his wife claimed a noncash charitable contribution for $499,000. They stated that this was the appraised fair market value of the building; they also said it was a “34-unit apartment building” in “good condition” and maintained that they had acquired it in 2000 for $1.2 million. Besides other omitted things, their tax form did not identify the appraiser or include an appraiser declaration.

The IRS denied the claimed deduction, arguing, among other things, that the taxpayers were not entitled to it because they were not the owners of the building; the corporation was. Just as important, they failed to meet the qualified appraisal and other documentation requirements applicable under the IRC’s section 170.

The taxpayers challenged the IRS’s denial in Tax Court.

Deduction flows to shareholder. The Tax Court rejected the government’s ownership argument. Although the corporation was the owner of the building at the time of contribution, the court found the petitioner, as the sole shareholder of an S corp, could still claim the deduction if he could satisfy the section 170 requirements. “Deductions for charitable contributions pursuant to section 170 flow through separately to the shareholders, sec. 1363(h)(2), and are not allowed to the S corporation,” the Tax Court stated.

Appraisal requirements. The IRC’s section 170(f)(11) states that, if a taxpayer claims a deduction in excess of $5,000, he must secure a “qualified appraisal of such property” and attach to his return certain information about the property. Among other things, a qualified appraisal must be done not more than 60 days before the gift and signed by a qualified appraiser.

The applicable regulations require that the qualified appraisal provide a description of the property in sufficient detail so that the IRS is able to verify that the appraised property is the property that was donated, information as to the qualified appraiser, a description of his or her qualifications, the appraised fair market value (FMV) of the property on the date or expected date of contribution, a statement as to the method of valuation the appraiser used to determine the fair market value, and the specific basis for the valuation.

For a donation above $5,000, but below $500,000, the regulations require the donor to attach an appraisal summary (different from a qualified appraisal) to his tax return and keep information at hand, including identification of the donee organization, a reasonably detailed description of the property, the fair market value of the property at the time the contribution was made, the method used in determining the fair market value, and, if the valuation stemmed from an appraisal, a copy of the signed report of the appraiser.

Two appraisals, but no FMV. In this case, the taxpayer staked his claim on two appraisals that two different persons undertook nine years apart.

Appraisal 1: Almost a decade before the petitioner’s company donated the subject building, an appraiser undertook a market rent survey of the two buildings. He used rental rates for five comparable buildings and concluded they had an annual gross income potential of about $390,800.

Appraisal 2: Approximately five months before the donation, a second person appraised the apartment buildings, ostensibly to update the 1999 appraisal. He said the “market value” of the first building was over $898,400 and the market value of the donated building was about $664,000, resulting in a total value of over $1.5 million. As he defined it, “market value” was “the highest price estimate in terms of money which a property Will [sic] bring, if exposed for sale in the open market, allowing a reasonable time of [sic] Find [sic] a purchaser who buys with knowledge of all uses of which it is adapted, and for which it was capable of being used.”

The purpose of the appraisal was to establish the properties’ values “after the renovation and remodeled [sic] condition,” the appraiser went on to say. And, the “[v]aluation premise [sic] will assume a renovated market position. Also, assumption will be made that normal management will be implemented.” As to the buildings’ exteriors, he stated that “condition will be projected as good. Exterior painting, tuck pointing, and necessary repairs will be made [sic] good marketing position.”

In terms of methodology, the second appraiser used the cost approach and the income approach. He said, “[T]he assemblage of sales was difficult for establishing market value.” As to the cost approach, he assumed a $40,000-per-unit construction cost and 15-year life expectancy to arrive at a $718,750 value for the first building and a $531,250 for the donated building. Under this approach, the total value for both buildings was $1.25 million. As to the income approach, the appraiser determined the market rental rate using nine comparable apartment buildings, estimated expenses using 25 comparable apartment buildings, and assumed a 5% vacancy rate. Based on these figures, he determined that the two buildings could generate an annual net operating income of nearly $250,300. He then went on to determine the buildings’ “market value,” using the mortgage equity process and a capitalization rate of 16%. The latter was based on a heightened risk involved with real estate investments, a projected interest rate of 12%, and a projected loan term of 15 years.

None of the arguments carried weight with the Tax Court. First, it pointed out that, pursuant to the regulation, whenever a taxpayer relies on more than one appraisal, each appraisal must independently comply with the qualified appraisal requirements. For multiple reasons, in this case, neither of them did.

Appraisal 1 deficiencies. The first appraisal obviously was outdated and as such on its face did not reflect the property’s value as of the date of contribution. By calling the second appraisal an update of the first appraisal, the petitioner conceded as much. Just as important, it failed to provide an FMV for the donated building. The appraiser used none of the three applicable approaches—income, asset, and market approach—but estimated the donated building’s annual profit potential by using a projected income stream. “It did not perform a discounted cashflow analysis on the estimated profit potential” to arrive at the FMV, the court said. For all these reasons, it was not a qualified appraisal.

Appraisal 2 deficiencies. The most critical flaw of the second appraisal was that it did not appraise the contributed property, but a “hypothetical, fully renovated version of the contributed property,” the Tax Court emphasized. At various points, the appraiser mentioned that the valuation assumed a “renovated and remodeled condition.” At the same time, VoA’s real estate agent testified that at the time of contribution the building was in poor condition and most of the apartments were uninhabitable.

Moreover, the appraiser did not determine the building’s fair market value but provided a “market value.” The FMV assumes a hypothetical willing buyer and willing seller. In regard to property, the FMV also reflects its “highest and best use as of the date of valuation.”

The court also pointed to numerous inconsistencies in the appraisal report. For example, in its “Reconciliation and Conclusion” section, the report stated that the buildings combined were worth $1.5 million under all three approaches, resulting in a “reconciled” value of $1.5 million. At the same time, the body of the appraisal included only valuations based on the cost and income approaches. What’s more, the body of the appraisal said the cost approach yielded a valuation of only $1.25 million.

Appraiser issues. Not only the appraisals, but also the appraisers failed to qualify under the regulations, the court found. It acknowledged that the first appraiser held a designation from the Appraisal Institute and regularly performed appraisals for compensation. But he failed the regulations’ strict reporting requirements because he did not provide the necessary declaration that he was holding himself out as an appraiser, was so qualified, and understood the consequences of providing a fraudulent overvaluation on the petitioner’s appraisal summary. The second appraiser did not include his qualifications in his appraisal report and also failed to furnish the declaration.

Problematic appraisal summary. Finally, the Tax Court found the petitioner’s appraisal summary substandard. It included misrepresentations and omissions. For example, contrary to the record, the petitioner said he had acquired the building in June 2000 at a cost basis of $1.2 million. On the tax form, he said it was in “good” condition, when the record showed the conditions were “very poor.”

Moreover, the petitioner claimed the appraised FMV was $499,000 when neither of the appraisal reports supported that figure. In fact, said the Tax Court, this number “smacks of manipulation.” He likely chose it to avoid having to attach a qualified appraisal to the tax return for contributions valued at over $500,000.

For all these reasons, the petitioner was not entitled to the claimed deduction.

For more information about valuations and appraisals, contact Filler & Associates.