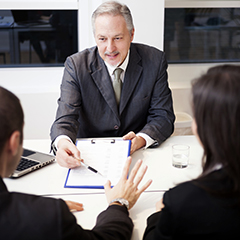 What happens to the commercial goodwill of a big accounting firm when a principal gets divorced? In a recent Texas appeals case, the wife accused the trial court of failing to account for commercial goodwill in valuing the subject interest by relying on a partnership agreement that did not address compensation under a divorce scenario.

Shortly after getting married, in 2008, the husband joined KPMG as a Class B principal. The company is one of the Big Four auditing and accounting firms and has approximately 1,900 partners and principals in the U.S. division. A 2008 partnership agreement provided that a principal’s sole interest in the firm was his required contribution to a capital account. In case of “separation,” by which the agreement meant death, withdrawal, or retirement, the member would receive the balance of his capital account, excluding any amount he owed under a loan he took out to fund his interest in the firm. At year-end 2010, the amount in the husband’s capital account was $715,000, and the loan amount was $700,900.

The parties retained experts to value the husband’s interest—a flashpoint in the case. In an August 2011 “letter,” the wife’s expert (an ASA) explained: “This Letter does not constitute a valuation report as defined by the Uniform Standards of Professional Appraisal Practices” and said that his submission was not a complete valuation report. He acknowledged that his calculation did not mention the partnership agreement, and, while it referred to tangible value, it did not discuss goodwill or distinguish between commercial and personal goodwill. He also ignored language in the offer letter as to the conditions applying if the husband were to end his employment at the firm. Further, he did not speak to the husband.

He essentially performed an excess earnings analysis. He determined that the husband owned approximately a tenth of one percent partnership interest in KPMG. A comparison of the husband’s position with similar positions led him to conclude that reasonable compensation amounted to no more than $700,000; therefore, $800,000 of the husband’s $1.5 million average income was attributable to his KPMG ownership interest. Applying a cap rate of around 33.3%, he determined the fair market value of the interest was $2.4 million. Because the $800,000 was excess income, he said, “it requires a higher rate of return than, say, normal income-based salary and so forth.” The market for the husband’s share was “a specific type of buyer that would have the skill set to be able to step in and receive the salary plus the excess income.” Also, since the valuation covered a single period and not a discounted cash flow period “out a number of years,” he did not adjust for present value.

The husband’s expert acknowledged that a large professional practice might possess commercial goodwill “when the firm is marketed and operated as a collection of individuals as opposed to a group of individual practices.” In this type of practice, owners usually hold a minority interest, he said; when one of them leaves, it “is generally not devastating to the entirety of the firm.” He emphasized that “corporate governance” was critical to valuing interests in a firm such as KPMG. He decided to base his valuation on the partnership agreement and the offer letter. According to him, “the only way to obtain value for your partnership interest is to sell it back to the firm.… You get the capital account, you pay off the debt, and that’s what you get.” Here, the interest was $14,100, the value of the capital account, minus the loan against it.

He also critiqued the report that the wife’s expert had submitted. For one, it was not “incomplete and nonstandard.” It also contained errors, he said. For example, the expert determined the interest was a minority interest but failed to apply the standard discounts for lack of marketability or lack of control. The competing valuation basically came down to normalizing compensation, the husband’s expert believed. But “you don’t make normalizing adjustments when you are appraising a minority interest because the owner of the minority interest has no power to enforce those types of normalizing adjustments.” He also contended the wife’s expert overstated value by applying “the typical 33% cost of capital applicable to post tax benefit streams to [the husband’s] pretax benefit streams.” Finally, the wife’s expert failed to take into account the outstanding debt against the partnership interest and the offer letter, which indicated that compensation was performance-driven.

Texas is a community property state, and the community’s interest in the value of a spouse’s interest in an entity depends on the form the entity takes. Generally speaking, if the asset is an interest in a partnership, any increases in the asset’s value that accrue during the marriage may be a community asset, whereas increases in a corporation’s net worth are not an asset of the community of each of the corporation’s shareholders. Mandell v. Mandell, 310 S.W.3d 531 (2010) (available at BVLaw).

Against this background, the wife in her closing argument claimed KPMG was a partnership, not a corporation, and fair market value was the applicable standard of value. In contrast, the husband characterized the interest as a “set of contractual rights defined and limited by the agreement.” Those rights were not salable, transferable, or assignable, he reminded the court.

“I don’t find that the contract controls,” the trial court stated at the outset of its analysis of the valuation issue. At the same time, the court only found professional goodwill, even though “[l]ogic tells me there is some [commercial goodwill].” Also, “it’s probably impossible to quantify.” Most importantly, even if there were a way to assign a value to commercial goodwill, the husband could only access it by remaining employed in the future. Perhaps, the court added, if the company went out of business in the future, “he might get some piece of the value.” Prior case law required valuing the partnership as a going concern, which neither of the experts did, the court emphasized. Assuming that is done, the court would consider other facts, including partnership goodwill, in determining the value of the interest at issue. In light of the evidence in front of it, it concluded that the husband’s interest was worth $14,000.

It denied the wife’s motion for reconsideration, emphasizing that the wife’s expert did not use the appropriate method to determine fair market value.

The wife attacked the trial court’s ruling in an appeal with the Texas Court of Appeals. Goodwill, she argued, was “the key factor in valuing the [husband’s] partnership interest,” and it was error to use the partnership agreement as the only method with which to establish the value.

Another complication confronting the trial court was the lack of any provisions in the partnership agreement for accessing the value of a spouse’s interest in an ongoing partnership at the time of divorce, the appeals court stated. Ultimately, the reviewing court brought back its analysis to an established principle: Whether a business possesses goodwill and what that value consists of were questions for the trier of fact, here the trial court. The latter could choose to credit the testimony of the husband’s expert as to the status of the partnership interest and reasonably come to the conclusion it reached. Therefore, the appellate court affirmed the trial court’s valuation of the husband’s interest.