Time to Switch Your C Corp to S Corp Status? 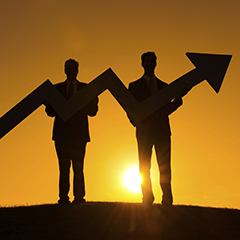 Thanks to legislation passed in 2013, the federal income tax rates for individuals remain historically low for single taxpayers with taxable income below $400,000.The rates for C corporations, however, remain at the same levels that have been in place for years.

As a Maine-based business owner, you may wonder if you should switch a C corporation to S corporation status. If you did, all the company’s taxable income would be passed through to you and the other shareholders and taxed at the relatively favorable rates for individuals. The double taxation of corporate profits would also be avoided.

There are several factors to think about when making the decision.

First, review the federal income tax rate structure for C corporations. The first $100,000 of annual corporate income is taxed at much lower rates. Specifically, 22.25 percent. If that same $100,000 was earned by an S corporation and passed through to you and the other shareholders, the tax hit would almost certainly be probably 28 percent or more. If your C corporation’s annual taxable income is above $335,000, the company pays an average federal rate of 34 percent. That’s still below the 39.6 percent maximum rate for individuals.

Therefore, converting from C to S status might result in your corporation handing out more cash to you and the other shareholders just so you can pay your personal income tax bills. In contrast, continuing as a C corporation and paying lower taxes at corporate rates could allow the company to keep considerably more after-tax cash over the years.

Another factor to consider is that the maximum federal income tax rate on C corporation dividends is now 20 percent for single people with taxable income above $400,000. Upper-income individuals may also owe the new 3.8 percent Medicare surtax on dividend income. For other taxpayers, the tax rate on dividends remains 15 percent. So the double taxation of corporate earnings is not nearly as big a problem as it was back in the days when dividends were taxed at high ordinary income rates.

The biggest thing to consider may be the built-in gains tax. Usually, it is imposed at a 35 percent rate on appreciated assets that are converted to cash or sold by a former C corporation within 10 years after converting to S corporation status. This means that the tax cost of making the C-to-S switch is often prohibitive. There may also be negative state income tax consequences.

When factoring in all these reasons, the best option is often to leave an existing C corporation alone, despite the fact that shareholder tax rates might be lower. Consult with Filler & Associates to reach the proper conclusion.

« Tax Court Foils ‘End Run’ Around Expert Rules
Contract Jurisdiction: Where Will a Dispute Be Heard? »