In challenging the Internal Revenue Service’s deficiency notice related to estate taxes for the decedent’s interest in a limited liability company, the taxpayer pulled out all the stops. He disavowed the initial appraisal that was the basis for his estate tax filing, claiming it overvalued the interest, and sought to compel the agency to stipulate an alternative, lower, valuation without making the appraiser available for expert testimony at trial. In addition, he attacked the government expert’s methodology and discounts. None of the arguments gained traction with the Tax Court. 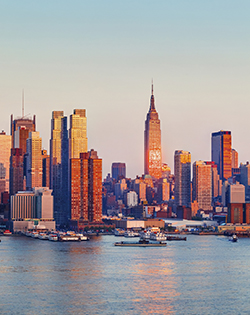 The decedent had a 16.67% interest in a New York limited liability company (LLC) whose principal asset was a 10-story commercial building with office and retail space in Manhattan. On the valuation date, it was fully leased.

The LLC was subject to an operating agreement whose provisions specified that membership was available to members of three family groups and transfer of membership interests to outsiders was subject to restrictions. Members participated in the management and control of the LLC, whereas a nonfamily member transferee could receive distributions and allocations of profits and losses but had no right to weigh in on management and control. To become a member, a transferee had to secure unanimous consent from other members. At the time the decedent transferred her interest in the LLC to a trust, she was a member in the LLC, but, on the date of death, the trust was the member.

Various valuation methods in play. For estate tax purposes, the petitioner obtained a valuation of the decedent’s interest in the LLC that was based in part on an appraisal for the LLC’s main asset, i.e., the building.

The building appraisal firm used a sales comparison approach, which yielded a value of $22.8 million. It also used an income approach based on the discounted cash flow (DCF) method. The appraiser projected building income for six years, capitalized the sixth year’s income to compute a terminal value, and discounted the income stream to present value, which was almost $20 million. Disregarding the first approach, the building appraiser concluded the asset was worth nearly $20 million based on the income approach.

The LLC valuation firm added the company’s cash and other current assets to the $20 million amount, subtracted liabilities, and arrived at a net asset value on the date of death of some $20.6 million. It then sequentially applied a 20% discount for lack of control (DLOC) and a 35% discount for lack of marketability (DLOM) to conclude that the fair market value of the interest at issue was $1.78 million.

The Internal Revenue Service (IRS) determined the taxpayer had undervalued the interest and issued a deficiency notice. Its expert regarded the LLC primarily as a real estate holding company and, therefore, relied exclusively on the discounted net asset value approach. He determined the interest was worth $2.3 million, accepting the petitioner’s proposed $20.6 million net asset value based on the LLC’s relevant tax return and the building appraisal but reducing the discounts to a 10% DLOC and a 26% DLOM (elsewhere the opinion states a 20% DLOC).

The petitioner challenged the IRS’s determination and asked the Tax Court for review. In so doing, he also disavowed his initial appraiser’s valuation, which he claimed was too high, alleging the first appraiser had failed to use the proper valuation method and had improperly classified the subject interest. To support his claims, he attached a new appraisal report to his petition.

As the court’s opinion describes it, the petitioner’s second appraiser characterized the interest at issue as a lesser-value—assignee instead of member—interest. Using both an income and net asset value approach, weighting their results at 80% and 20%, and applying “the appropriate applicable discounts,” the new appraiser arrived at a value of just above $1 million.

In a pretrial motion, the petitioner sought to compel the government to stipulate the second appraisal without making the appraiser available at trial. (The court’s opinion suggests that, due to a fee dispute between the petitioner and the second appraiser, the latter refused to appear in court.) The government argued that the new appraisal should be excluded from evidence on various grounds, including the apparent failure of the petitioner to have the appraiser testify as an expert witness and make her available for cross-examination.

After the court denied the pretrial motion, the petitioner asked for reconsideration, contending that the new appraisal was admissible as expert testimony by way of stipulation and also arguing that the IRS expert’s valuation was flawed. The court considered both evidentiary and valuation arguments in turn.

Missing expert witness. “As best we understand,” the court said, the petitioner argued that, because the IRS could not dispute the authenticity of his petition, including the attached new appraisal, it had to stipulate both the petition and the attached appraisal. Both documents were in evidence. Any requirements under Tax Court rules regarding the admission of expert testimony no longer applied; in any event, the rules only applied if the petitioner were to call the appraiser to testify, which he did not.

The court dismissed the petitioner’s argument as an attempt “to end-run our procedural rules … or to prevent this Court from exercising its gatekeeper function with respect to expert testimony.” Neither the Tax Court’s evidentiary rules nor Fed. R. Evid. 702 allowed for admission and consideration of the new appraisal. The petitioner asked the court to consider the report as an expert opinion, without making the author available at trial. He failed to qualify her as an expert and meet the preconditions for receiving the appraisal into evidence; because the report was not in evidence, the court could not consider the opinion.

The court said the first appraisal, which the petitioner had attached to his estate tax return form, was in evidence, but it declined to rely on it as expert testimony.

‘Redefining’ character of subject interest. The petitioner next contended that both his first appraisal and the IRS expert’s valuation were defective but that there was sufficient other evidence in the record to enable the court to determine a fair market value of the subject interest that was less than the $1.78 million he initially had reported.

The petitioner’s valuation-related challenges broke down into two major components.

1. Classification of interest. The first appraisal and the IRS appraisal erroneously classified the subject interest as a member interest, when in actuality it was a nonfamily member, or assignee, interest, the petitioner argued. This was so because the applicable fair market value standard envisioned a hypothetical willing buyer, who in this case could only be a nonfamily member and, therefore, could only obtain an interest that had greater limitations and thus was of lesser value.

The court saw this argument as an improper attempt to “redefine” the character of the subject interest. The petitioner “collapse[d] the two steps of the valuation process” into one. First, the valuator must identify the nature and character of the interest to be valued, and second, he must objectively determine its value. Here, the decedent was a member of the LLC at the time she transferred her interest to the trust. Therefore, the interest was a member’s interest.

Under the fair market value standard, the court said, the best way to account for restrictions on a member’s lack of influence on decision-making was to apply a discount for lack of control (or minority interest), as both the petitioner’s first appraiser and the IRS expert did.

2. Valuation methodology. The petitioner claimed the IRS expert erred in treating the LLC as a real estate holding company and, by extension, using the discounted net asset value approach to value the subject interest. Because it was in part an operating company, some weight should have been given to its earnings and distributions.

The court recognized that the LLC was a going concern even assuming its members “had in mind the future appreciation of the building.” But, even if the IRS expert viewed the company primarily as a real estate holding company and excluded the market and income approaches for his valuation, he accepted the $20 million value the petitioner had offered regarding the LLC’s principal asset, the building. The building’s value, in turn, resulted from the building appraiser’s use of the income approach. In some of its earlier decisions, the court said it had allowed a weighted approach to valuing a closely held real estate firm, combining a net value and an income capitalization approach. For all these reasons, the LLC’s value before determining the value of the decedent’s proportionate interest was $20.6 million.

The court also upheld the IRS expert’s discounts, finding the petitioner had provided no expert testimony to support different rates. In sum, the decedent’s interest was worth $2.3 million.

For more information about valuations, schedule an appointment with Filler & Associates.

« Sell (or Buy) a Corporate Business With a Tax-Free Reorganization
Time to Switch Your C Corp to S Corp Status? »