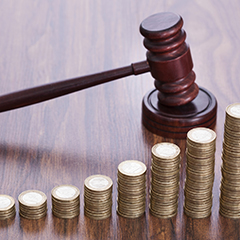 After a partnership dispute arose, the dismissed stakeholder sued, claiming the defendants breached an agreement that required them to buy back his interest, and retained an expert to value the business. Pretrial, the defendants unsuccessfully challenged the expert’s valuation for failing to comport with the goodwill requirement in a controlling agreement. The jury adopted the expert’s valuation, but the trial court subsequently set the verdict aside, prompting the plaintiff to appeal.

The defendants bought a retail energy business in which the plaintiff owned an interest. As part of the sale, he exchanged his old partnership interest for partnership units in the new company and also entered into an employment agreement. A related contract provided for a buyback of his interest (nearly 2%) if he was terminated without cause, and a provision in the partnership agreement specified that in appraising the interest “no value shall be placed on the goodwill or name of the Partnership.” About a year and a half later, the plaintiff was terminated and sued in state district court, initially alleging the dismissal was without cause but subsequently adding a claim that the defendants also had breached the buyback agreement.

The plaintiff retained an expert who used a market approach to estimate the business was worth $98 million. His affidavit stated that his value “did not include a value for the goodwill or name of the Partnership.”

The defendants attacked the valuation in a pretrial motion, claiming the business’s net, or book, value on the termination date was only $35 million and arguing that the partnership agreement mandated that the plaintiff’s interest be calculated according to the book value under the asset approach. The expert’s opinion, which sought to introduce evidence as to the overall business value, was inadmissible, they contended.

The court questioned the expert outside the presence of the jury to determine whether he had attributed any value to goodwill. The expert agreed that the company’s book value was $35 million, resulting in a $63 million difference between its net worth and his calculation of value. He said that the “Sarbanes-Oxley Act of 2002” required that an appraiser accounted for a company’s value in excess of net worth by ascribing value to its different intangible assets; whatever value remained after allocation of all the other intangibles represented the value of a company’s goodwill. The expert added that there were guidelines from the Auditing Standard Board (ASB) to carry out the “allocation of intangibles.” Even though his own firm had followed the ASB procedure in many cases, he did not do so in this case because not enough information was available to him and it was “a fairly exhaustive process.” Since he did not follow the ASB guidelines, he could not say that doing so would have resulted in a $0 (zero) value for goodwill. Regardless, he stated that he had “placed no value on goodwill” and did not believe his $98 million estimate included goodwill; “service businesses don’t tend to generate that sort of value in the absence of some intrinsic value,” he said. In other words, the company’s intangible assets were strong enough to account for “at least a significant part of the $63 million gap.” The trial judge denied the defendants’ motion and admitted the opinion into evidence.

At trial, the expert explained his methodology to the jury. In a first step, he considered “dispositive” historical transactions that involved the company to determine how much willing buyers and sellers paid for interests in the company. He emphasized that none of these transactions placed a value on goodwill or the name of the partnership.

In a second step, he performed a “confirmatory” analysis with two sets of comparables. The first included publicly traded companies that fell under the same standard industrial classification (SIC) code. The second set included three precedent comparable transactions. He admitted that, in terms of the precedent transactions, two of the three allocated a value to goodwill: Specifically, goodwill accounted for about 13.1% of the total purchase price for the three transactions. But, he claimed, there was no need for an adjustment in his valuation because that 13.1% rate was offset by the fact that the purchase price in the three transactions already reflected a discount to account for the sale of minority interests. At the same time, he noted that, if a goodwill-related adjustment were necessary here, it should be in the amount of no more than $60,000. By his calculation, the plaintiff’s 2% interest was worth $1.98 million, he said.

He defined book value as a company’s “assets less liabilities on a lower cost of market basis.” Under this approach, the company was worth $35 million and the plaintiff’s interest $780,000, he stated. But, he added, book value failed to value all of the company’s assets and implied a value that was lower than the one the partnership agreement described. The correct value under the contract was market value.

On cross-examination, he admitted that he had done no analysis to explain the makeup of the $63 million valuation gap. But he stated that he did do an analysis to determine whether there was any value of goodwill or the company’s trade name and concluded there was no goodwill. Yet, he also admitted that considering his use of three precedent transactions that included some goodwill, his $98 million value had goodwill “embedded.”

The jury decided the plaintiff was terminated without cause and accepted his expert’s $1.98 million valuation.

In a post-trial motion, the defendants argued the expert’s opinion was unreliable. The expert failed to explain the $63 million difference in value (“because he did not do the work”) and, therefore, lacked any basis on which to conclude that no portion of the difference represented goodwill. The trial court agreed and set aside the jury’s damages finding. Contrary to the partnership agreement, the expert had not applied “the generally accepted method for allocating intangibles” to show his calculation did not contain goodwill. His assertion that there was no goodwill was “the type of ipse dixit opinion which is prohibited in the case law,” said the court. The testimony could not support the jury’s verdict.

In his appeal to the Texas Court of Appeals, the plaintiff argued the trial court’s damages ruling was error. For one, the partnership agreement did not require the expert “affirmatively” to assess a value for the company’s goodwill and subsequently deduct it from the $98 million enterprise value. All he had to do was state that his valuation did not include goodwill. This he did.

The appellate court agreed that the partnership agreement did not prescribe a method with which to value the interest without adding in goodwill. It merely required that the valuation not include goodwill. But, the court continued, “[t]he relevant question here is not what method is generally accepted or reliable … but rather, what is a generally accepted and reliable method by which to arrive at the conclusion that one’s valuation does not attribute value to goodwill.” In this case, the expert identified a generally accepted process—following the ASB guidelines—but decided not to use it. Although this failure to adhere to it was not conclusive as to the reliability of the valuation, the expert failed to show that an alternative method could achieve the same objective.

Specifically, he asserted that the valuation did not include goodwill, but he could not explain the basis for his conclusion. His testimony wavered. First, he asserted that he determined the factors that suggested an existence of goodwill were not present in this case. Next, he said the company’s unspecified intangible assets had “significant value,” as if to suggest they could have made up the entire $63 million difference leaving nothing for goodwill. Finally, said the court, at trial the expert admitted that the precedent comparable transactions he had selected included goodwill and in response proposed, without doing more, a $60,000 deduction to compensate for any goodwill embedded in his valuation.

For all these reasons, his opinion was unreliable and was not legally sufficient evidence. At the same time, the appellate court refused to issue a take-nothing judgment for the defendants. The parties had agreed that the company had a book value of $35 million, and the plaintiff’s expert had testified that, using that value, the plaintiff’s interest was worth $780,000. Therefore, there was evidence to support some damages. Because liability also was a contested issue, the appellate court reversed and ordered a new trial on all issues.