Fall Back on Bad Debt Deductions 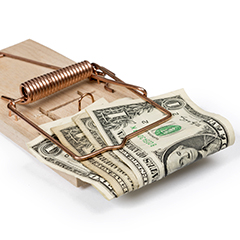 If your Maine-based small business has customers that don’t pay their bills, there could be a last resort: You can deduct a bad business debt in the year it becomes worthless, as long as you’ve tried everything to collect.

In order to get the write-off, you have to prove that the debt will not be paid. Sometimes that’s easy, as in the case of the debtor’s death or declaration of bankruptcy. Otherwise, it’s up to you to prove the worthlessness of the debt.

The timing of bad debt deductions can be tricky, and it’s important to build a solid case. Here are a few tips:

Document all the attempts you make to collect debts, including telephone calls, letters and e-mail communication.

Be persistent. Don’t just send one letter and let it go at that.

Go after bad debts quickly to figure out whether recovery is possible. A bad debt deduction must generally be claimed on the tax return for the year it was sustained. You may not be able to take a loss in a later year.

Keep in mind that the statute of limitations for bad debts is longer than the usual three-year time limit for most items on your tax return. In general, you can amend your tax return to claim a bad debt for seven years from the due date of the tax return for the year that the debt became worthless. For more information, talk with Filler & Associates.