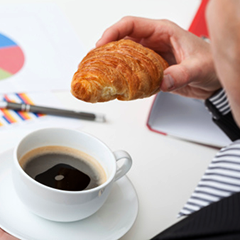 In one significant case, the Tax Court allowed a taxpayer to claim deductions for meals that stretch the limits of the traditional “sleep-or-rest” rule for business travelers. (Bissonnette, 127 TC No. 10)

Generally, you can deduct 50 percent of your meals and all incidental expenses when you are away from home on business. The IRS considers you to be “away from home” if business duties require you to leave the general area of your tax home substantially longer than an ordinary work day and you need to sleep or rest in order to meet the demands of the job.

For these purposes, your tax home is your regular workplace, regardless of where you actually reside.

Therefore, if you’re merely grabbing 40 winks in between shifts, you probably won’t qualify for meal deductions. Conversely, if you need an extended nap before resuming work, you may be in line for tax breaks.

In the Tax Court case, meal deductions were claimed by a ferryboat captain who normally worked 15 to 17 hours a day for seven days, with the next seven days off. The captain was employed by a company based in Seattle, Washington, which carried travelers on turnaround voyages to destinations on Puget Sound. During the peak season one year, the taxpayer had a layover of one hour, increasing to five hours the next two years. In the off-season, the captain’s mid-cruise layovers were six hours long.

At the end of a workday, the captain usually did not have time to return to his personal residence for dinner. On account of an early starting time and long commute to and from his residence, he slept on a cot stored aboard one of the company’s vessels. The company did not require him to stay overnight, pay him during this time, or provide an allowance for meals or incidental expenses.

The captain deducted the expenses on his tax return. The IRS denied the captain’s meal and incidental expense write-offs because he was not “away from home” under the tax code definition “because his voyages did not require him to obtain sleep or rest.”

However, the Tax Court found that it was reasonable for the captain to obtain sleep or rest so he could meet his job demands. He was responsible for his crew and the safety of up to 1,200 passengers on voyages. As a result, the court ruled that the six-hour layover resulted in the taxpayer being away from home in the off-season. Once sleep or rest is required, 50 percent of the cost of his meals could automatically be deducted, even if these expenses were of a purely personal nature (for example, there was no business substantial discussion with a customer or client).

In addition, the Tax Court determined that the workday was long enough to use the standard per diem rate without prorating the amounts.

Can other taxpayers take advantage of this case if they work long hours? There’s no definitive time established for the “sleep-or-rest” rule. Contact Filler & Associates for information on when deductions may be made.