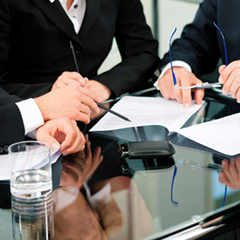 When using non-compete clauses in employment contracts, company managers should be mindful that such provisions are better able to withstand legal challenges if they are narrowly tailored. As an attorney, your business clients should consult with you before using these clauses.

When an employee challenges a non-compete agreement, courts often look at whether the agreement is reasonably limited in terms of time and geographic scope. If it is too broad, a court may find it inhibits the former employee’s ability to earn a living.

An example of a precisely targeted non-compete agreement is found in a case involving a one-year clause tucked into a salesperson’s contract. The precise nature of the provisions helped the company succeed in a legal challenge.

Guy Rogers worked as a sales representative for a number of electrical equipment manufacturers including Emerson Electric. Rogers formed his own company so he could serve as a manufacturer’s representative for different companies without being a full-time employee at any of them. He served as an independent sales contractor in Georgia, Alabama, Tennessee and Florida.

When Rogers agreed to serve as one of Emerson’s sales reps, he signed a non-compete agreement that barred him from selling competing products for one year after he ended his relationship with the company. He also was barred from serving as a sales manager for any Emerson competitor and agreed not to reveal any of the company’s trade secrets.

“Rogers took measures contrary to Emerson’s interests almost immediately after he terminated his relationship with it,” according to court documents. Emerson filed suit alleging that Rogers breached his agreement by selling another brand of ceiling fans and misappropriated trade secrets by providing confidential information to a competitor. The company sought both monetary and injunctive relief.

A federal judge ordered Rogers to honor his non-compete agreement by not selling the other fans in Georgia, Alabama, Tennessee and Florida for one year. Rogers appealed, arguing that the anti-competitive provisions of his agreement were too broad.

The 8th U.S. Circuit Court of Appeals upheld the decision to force Rogers to honor his agreement. The court found that while the non-compete provisions barred Rogers from working in a sales or management capacity for an Emerson competitor, this term wasn’t broad enough to deny Rogers any chance of employment within the electrical equipment market. He could still sell electrical equipment that didn’t conflict with Emerson products.

Status as an independent contractor working for several companies didn’t give Rogers the freedom to ignore his contractual obligations.

The Emerson case illustrates that narrowly drawn non-compete provisions stand an excellent chance of being upheld. Such agreements can provide vital protection for a company’s business and trade secrets. Business managers should consult with their attorney and Filler & Associates to set up a non-compete clause that adheres to applicable laws and is narrow enough to be effective.